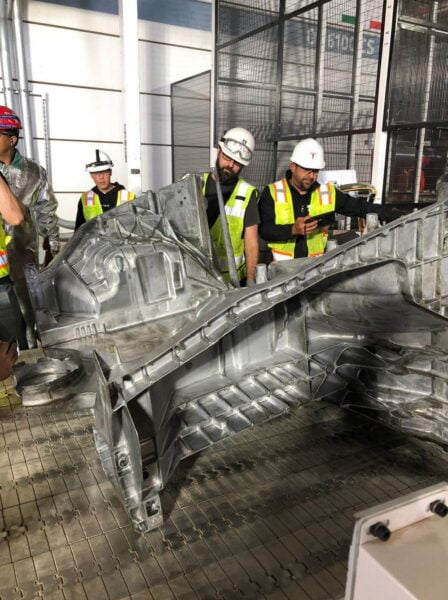 Tesla’s Gigafactory Texas is set to begin production this summer, and recently the company’s Director of Product Design confirmed plans to produce a diecast Model Y.

According to a new post on the Tesla Motors subreddit, Tesla’s Gigafactory Texas produced a 130-kilogram Diecast, seemingly with the front underside of the Model Y.

While Tesla’s Model Y was previously produced in multiple casting parts, the company has transitioned over the past year to a single front-piece cast, which is also said to decrease production time significantly.

Definitely the front underbody of the Tesla Model Y

Tesla also increased the price of both its Model Y and Model 3 units last month, by up to $1,000 (USD) depending on the variant selected by the buyer.

Tesla also led worldwide sales of EVs in this year’s first quarter, having sold a total of 184,500 units total within the period.

Tesla is planning to add a new showroom and service center in Northern Netanya, Israel, according to a property lease signed by the automaker, reports Globes. The site is located at 39-41 Hakadar Street in Netanya, complete with a nearby store from Chinese automaker Geely Geometry. The property includes about 3,300 square meters (10,826.77 square […]
Peter McGuthrie
5 hours ago

Thailand has been one significant expansion project from Tesla in recent months, and now the automaker is launching some of its first fast-charging stations and a new retail store in the country. Tesla is preparing to launch the first V3 Supercharger station in Thailand, located on the B1 floor of the CentralWorld shopping complex in […]
Peter McGuthrie
6 hours ago

The Motortrend crew recently visited Frito-Lay’s upgraded, zero-emission distribution center in Modesto, California to talk with Tesla Semi drivers and see the truck in person. The publication was able to gather a few extra specs on the Tesla Semi, noting that the huge vehicle sported a Model S Plaid tri-motor powertrain but turned around the […]
Peter McGuthrie
6 hours ago