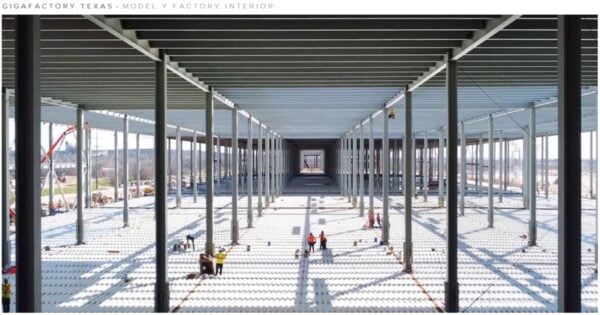 In a new video from YouTube channel Terafactory Texas, we can see drone footage of Tesla’s Gigafactory Texas as it nears completion. Among some of the more developed features, the video shows most of the paint shop’s temporary roof having been removed, as well as the near completion of the building’s west-facing wall.

In addition, the most significant developments in the area are the construction site’s courtyard pit, which includes newly-poured mud slabs and concrete, as well as the inclusion of rebar squares. Tesla has also brought in more of the concrete boxes seen in recent weeks, which will be used to fill out the courtyard area.

Tesla has also made significant progress on its Bobcat Project area, which was confirmed to be getting a new facility, according to filings discovered early Friday.

We also recently got a peek at a new bridge crane, which arrived at the site and was installed in an update late last month.

While Tesla’s Cybertruck production is rumored to be beginning in June, perhaps lining up perfectly with the Texas Gigafactory’s completion, Cybertruck prototypes have already been spotted driving around the Austin site.

Tesla Product Designer Javier Verdura also confirmed in recent weeks that the company is working on a diecast Cybertruck model.

More electric vehicles (EVs) are set to be sold in China this year than throughout the rest of the world combined, according to an exposé from The New York Times on Monday. As many countries struggle to incentivize EV sales using tax credits and subsidies, China’s customer base has already begun to pivot toward the […]
Peter McGuthrie
18 hours ago

A coming software update has added a useful pop-up feature for Tesla’s Superchargers, showing new details that weren’t previously included. Tesla software update 2022.36 includes a newly designed pop-up map feature for Supercharger locations, as detailed by Not a Tesla App on Monday. The pop-up map includes information such as the number of available charging […]
Peter McGuthrie
18 hours ago

Tesla’s official CCS Combo 1 adapters have begun delivering to customers, as noted on Monday by a Model 3 owner (via Reddit). The CCS adapter costs $250 in the U.S. and $325 in Canada, offering up to 250 kW at third-party charging stations where Tesla’s proprietary Supercharger connections aren’t available. Tesla launched official sales of […]
Peter McGuthrie
19 hours ago