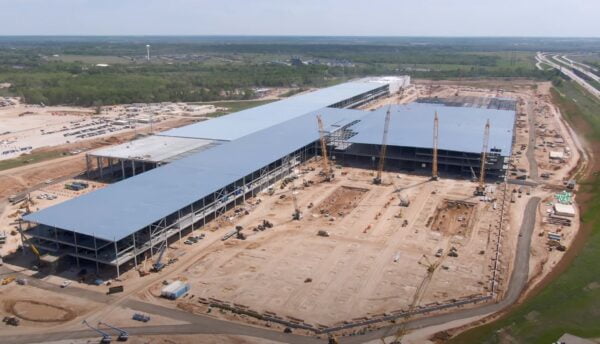 Documents were filed by Tesla on April 30 for a “Bobcat Project,” and according to the site plan, the company is looking to build a second facility at its Gigafactory Texas site, as reported by Austin Business Journal.

The new facility’s location may span as many as 100 acres and could land somewhere on Harold Green Road, just near the Gigafactory Texas site, which is also set for completion this summer.

While it isn’t quite clear what Tesla plans to use the second facility for, the company confirmed last year that it someday plans to build its own 4680 battery cells at or near Gigafactory Texas and that it will construct a lithium hydroxide refiner at the location to support the production of the electric vehicle (EV) batteries.

Tesla’s Colorado River Project LLC purchased over 2,500 acres within Austin’s extraterritorial jurisdiction, another nearby site which onlookers are speculating about.

Upon completion, the facility is expected to begin production on its long-anticipated Tesla Cybertruck, which may begin as soon as June if the Gigafactory is finished in time. Tesla also confirmed that it has a diecast Cybertruck model in the works, as shared by Tesla Product Designer Javier Verdura.

Tesla continues to leverage its in-car notification system to alert owners to charge their vehicles, when there’s a chance electrical grids may be impacted by weather conditions. Full Self-Driving (FDS) beta tester, Chuck Cook, shared a message he received in his Tesla on Tuesday. “In the next 48 hours, a storm is forecast to make […]
Sarah Lee-Jones
2 hours ago

After a Delaware judge set Tesla CEO Elon Musk’s deposition for this week, the opportunity for the billionaire to answer questions under oath has been pushed back to next week. Musk’s deposition for an upcoming trial with Twitter has been rescheduled to October 6 and 7, according to a filing with the court on Tuesday […]
Peter McGuthrie
9 hours ago