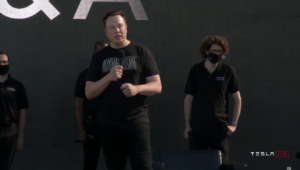 For the first time in history, an automaker is getting into the business of lithium chemical production.

According to Benchmark Minerals, Tesla will be building a chemical plant dedicated to the refinement of lithium hydroxide. The plant is set to be built next to the Terafactory in Austin and is planned to begin production by Q4 2022.

“There’s enough lithium in the United States to convert the entire United States fleet to electric … It’s one of the most common elements on the planet.” – Elon Musk

Tesla also just signed a deal with Australia’s Piedmont Lithium which will help supply the company with lithium in the meantime. Benchmark also predicts that Tesla will need to utilize other short-term lithium suppliers, even in spite of the size of the Piedmont deal.

In a thread on Reddit, one user commented on the article, “Real question is how far Tesla will take this venture, will they become the de facto lithium refiner in the world? Or will they just make enough for their needs?” The user continued, “Every time Elon does this he makes Tesla just that much more valuable as the umbrella of Tesla grows in size. I think that’s what most people missed from battery day that he was trying to get across, it was basically Elon saying Tesla will become the de facto battery supplier in the new all-electric world.”

With Tesla’s new model for the battery, which is set to cut costs significantly and use lithium as a base element, we can expect to see some major changes in the EV and auto industries at large over the course of the next decade and beyond.

Recent weeks have brought on conversations about Tesla’s price cuts in markets around the world, and now the automaker is pushing a new message on its website for Model 3 leasing. Tesla’s Model 3 is now leasing at prices as low as $399 per month, according to a change on the automaker’s website yesterday, notes […]
Peter McGuthrie
33 mins ago