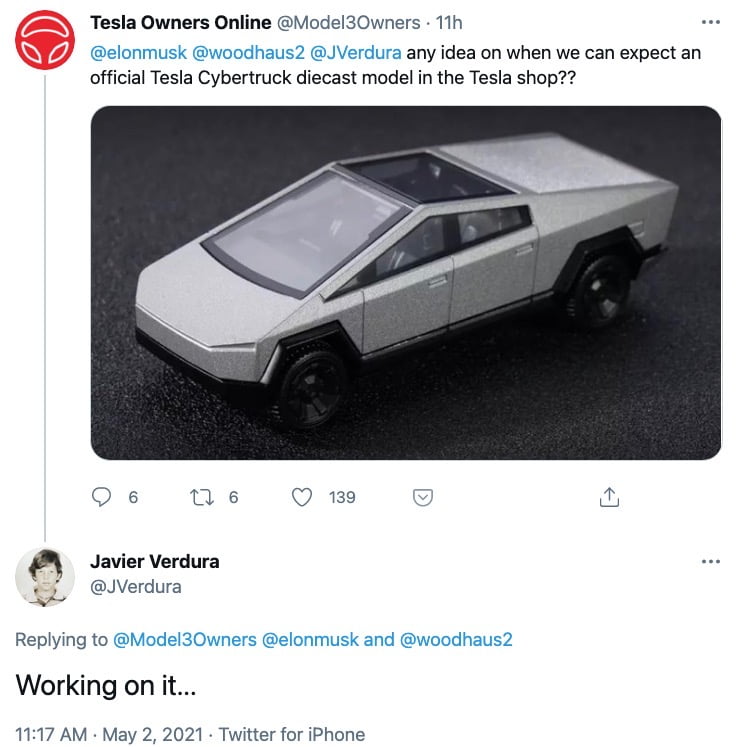 If you’ve been wondering whether Tesla is going to launch an official diecast Tesla Cybertruck model in its online store, we now have confirmation it’s in the works, directly from the company.

According to Javier Verdura, Tesla’s Director, Product Design, he confirmed a diecast Cybertruck was in the works on Sunday morning. Verdura has worked at Tesla since 2012.

When asked by Tesla Owners Online (@Model3Owners) whether an official diecast Cybertruck was coming from the company, Verdura replied, “working on it”.

Tesla’s online store currently has 1:18 scale versions of the new Roadster, Model X, Model S and Model 3. There’s a 1:24 scale model of the Tesla Semi as well. Missing is the Model Y and Cybertruck. It’s unclear if the diecast Cybertruck will be made from steel and be bulletproof too…

All of these current diecast models cost a hefty $175 USD each and are created using the same 3D CAD data from actual Tesla vehicles, and are collectibles for anyone that’s a fan of the company.

Tesla reported record Q4 2022 earnings today and the automaker also provided an update on its upcoming Cybertruck. According to Tesla, it says “Cybertruck remains on track to begin production later this year at Gigafactory Texas. Our next generation vehicle platform is under development, with additional details to be shared at Investor Day (March 1st, […]
Sarah Lee-Jones
1 day ago