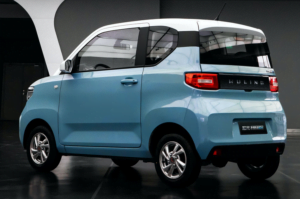 A new electric vehicle (EV), created from a joint General Motors (GM) venture, has already brought in tens of thousands of preorders and surpassed the Tesla Model 3, becoming China’s best-selling EV currently on the market.

The car, Wuling’s Hongguang Mini, was launched in late July and costs only $4,300 dollars, a major selling point for China’s less affluent population. It has now become China’s top-selling car according to the Wall Street Journal, and is set to compete very closely with Tesla’s Model 3, the price of which is starting at $37,600 after subsidies.

The Hongguang Mini is tiny, to be sure, but it can also seat up to four adults. It also features a trunk that can be used, though only if the back seats are folded down.

In China, Tesla recently produced 22,929 Model 3 units at its Shanghai Gigafactory. The Model 3, currently the Hongguang Mini’s largest competitor, is the world’s top-selling EV, though the Chinese EV market is likely Tesla’s most important market.

While it should come as no surprise that a vehicle as affordable as the Wuling Hongguang Mini would beat out Tesla’s Model 3 for China’s best-selling vehicle, it will be interesting to see what the future holds for the two brands.