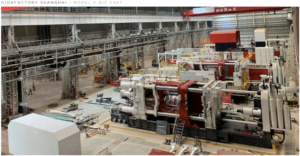 We knew Tesla’s Shanghai Gigafactory planned to increase to three shifts after the country’s national holiday, but the results are truly stunning.

In October 2020, Tesla’s Giga Shanghai produced an amazing 22,929 Model 3 units, as reported by Tesmanian (save 10% off floor mats and more with coupon code TESLANORTH10).

This equates to a weekly production rate of 5,177 units, which makes earlier predictions of 300,000 Model 3s in 2021 seem like a plausible goal.

If that wasn’t enough, it has been reported that November production rates have increased beyond 5,700 units per week, marking a steady increase from past production levels. If this increase is to continue into and throughout 2021, it’s likely that Tesla will surpass 300,000 Model 3 units from Shanghai in 2021.

Tesla Shanghai annualized Model 3 production progressed from 250k in September (capacity stated in Q3 update letter) to 270k in October, and now 300k in November…
This suggests that the 300k prediction for 2021 is grossly underestimated doesn’t it? @jpr007 @ICannot_Enough https://t.co/Ali82dqGhu

Another major factor that will greatly improve Tesla’s production capacity is the completion of its Giga Berlin factory, set for summer 2021. This will greatly free up the production schedule for Giga Shanghai to continue producing vehicles for Asian markets, while Gigafactory Berlin covers its own European market. If they’re already producing almost 6,000 Model 3 units a week in Shanghai, it’s hard to even fathom what the Chinese factory will be able to do for its own market once it’s no longer exporting a large volume of its cars.

While Tesla Shanghai’s October results are impressive, it’s safe to say that November’s numbers are going to be even better.