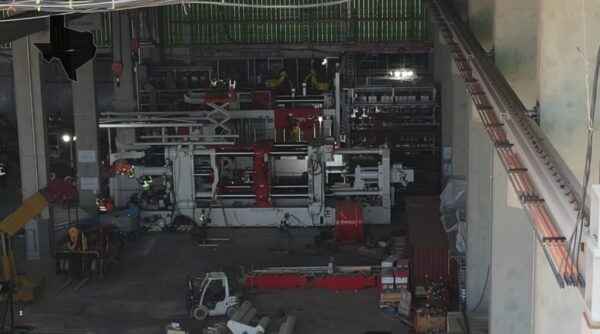 In a video shared by YouTube channel scouts Terafactory Texas, we can see the very first shots of Tesla’s Austin Gigafactory GigaPress in motion, as it is fine-tuned during pre-production. While the site’s second GigaPress is still being assembled, the first is preparing to start casting production vehicles as soon as the end of this week, according to the video’s description.

In addition to the GigaPress action, the video also includes footage across the Texas production facility, which is rumored to begin producing Tesla’s long-anticipated Cybertruck as soon as June, with deliveries set to arrive by the end of this year.

The site has also seen major strides on its GeoPier and Bobcat Project area, a confirmed new facility on the site of Gigafactory Texas, which may span as many as 100 acres. While it isn’t totally clear how Tesla will plan to use the new Austin, Texas facility, the company confirmed last year that it plans to build its own 4680 battery cells in Texas, and to build a lithium hydroxide refiner – either or both of which could end up in the site’s region.

A 30-foot long, 12,000 lb metal sculpture featuring Elon Musk’s face atop the body of a goat riding a rocket has been spotted on the streets of Austin, Texas (via Fox Business). The statue was commissioned by a group of cryptocurrency enthusiasts who created a project called the “Elon Goat Token.” They wanted the sculpture […]
Nehal Malik
15 hours ago