Tesla’s first-quarter sales made up 16% of the overall EV market share, beating out companies like SAIC, Volkswagen Group, BMW Group, and Stellantis, who made the remaining top 5 spots, according to EV Sales. 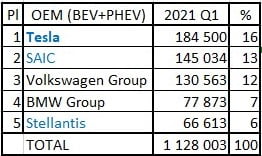 SAIC’s Wuling HongGuang Mini EV, a joint venture with General Motors and Wuling, contributed in a huge way to the company’s accomplishment of selling 13% of the overall EV market share, though the company also benefits from Chinese exports since it’s the only Chinese EV brand that exports beyond the country.

During Tesla’s recent Q1 2021 earnings, the company said its Model 3 sedan was the best selling premium car in the world.

Tesla continues to leverage its in-car notification system to alert owners to charge their vehicles, when there’s a chance electrical grids may be impacted by weather conditions. Full Self-Driving (FDS) beta tester, Chuck Cook, shared a message he received in his Tesla on Tuesday. “In the next 48 hours, a storm is forecast to make […]
Sarah Lee-Jones
2 hours ago

After a Delaware judge set Tesla CEO Elon Musk’s deposition for this week, the opportunity for the billionaire to answer questions under oath has been pushed back to next week. Musk’s deposition for an upcoming trial with Twitter has been rescheduled to October 6 and 7, according to a filing with the court on Tuesday […]
Peter McGuthrie
8 hours ago