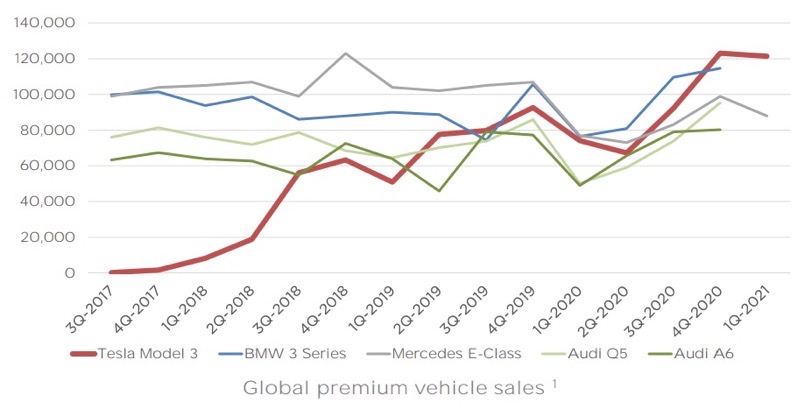 During Tesla’s first quarter earnings report, the company said its Model 3 sedan was the “best-selling premium sedan in the world,” a stat based on the most recent comparable publicly available OEM data.

Tesla said “about three and a half years into its production, and even without a European factory,” the Model 3 led worldwide premium sedan sales in Q1. The California electric vehicle maker pointed the Model 3 outsold “long-time industry leaders” such as the BMW 3 Series and Mercedes Benz E Class.

“This demonstrates that an electric vehicle can be a category leader and outsell its gas-powered counterparts,” explained Tesla.

Tesla said in its Q1 update they believe its Model Y compact crossover SUV will not only dominate its category, but end up becoming the “best-selling vehicle of any kind globally.”

According to Lee, the Toyota Corolla is the world’s top-selling car at roughly 1.5 million units sold in 2019. For Tesla to top this, it means the Model Y would need to sell 1.5 million units next year or in 2023.

Musk has said in the past the Model Y would be its most popular vehicle. Currently, demand for Model Y in China has been off the charts.

In February, the Tesla Model 3 was the world’s most popular EV at 28,014 units sold, followed by the Wuling HongGuang Mini EV at 20,167, then the Model Y in third place at 13,971, according to data compiled by EV Sales blog. As Model Y production still needs to ramp up at Giga Texas and Berlin, the compact crossover has still yet to see its peak production rate.