After outselling the Tesla Model 3 and Model Y in January, the Wuling HongGuang Mini EV has risen to the top of sales charts again in March.

According to EV Sales, the micro and affordable Wuling HongGuang Mini EV sold the most units in China’s EV market in March, totaling 39,745 units sold and marking the third-best-selling vehicle in the overall auto market.

Following immediately behind the Wuling Mini EV were Tesla’s Model 3 and Model Y, which sold a total of 25,327 units and 10,151 units, respectively. 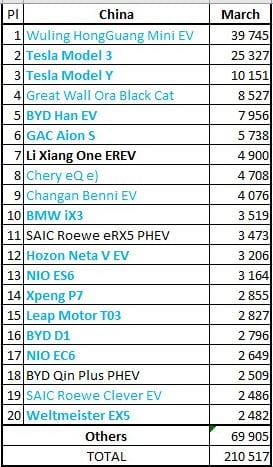 Other China-based automakers Li, Xpeng Motors, and NIO saw impressive numbers for their own purposes this quarter too, with the Li Xiang One EREV landing seventh on the list, while Xpeng’s P7 took the 14th spot on the list, with NIO’s ES6 taking 13th, and the company’s EC6 taking 17th. 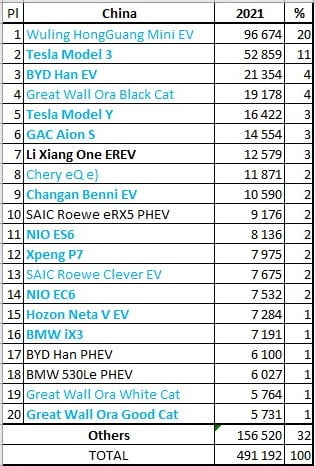 Still, despite the gains of other companies like NIO and Xpeng, among several others in the market, Tesla is holding on as one of the region’s top-sellers, and that isn’t likely to change anytime soon.