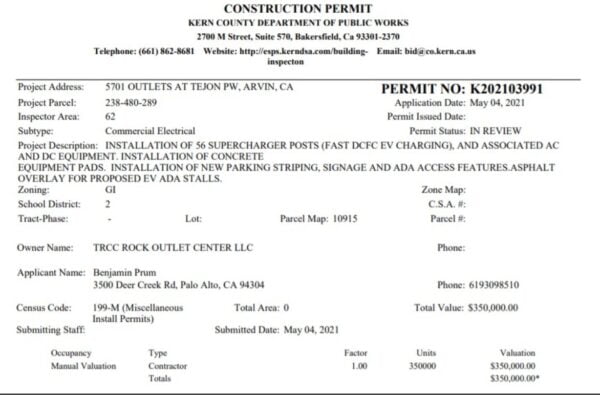 According to MarcoRPTesla, Tesla has filed construction permits for the construction of a new 56-stall Supercharger station at the Tejon Ranch Outlet Mall in Arvin, California. The application date is labeled May 4, and displays a total project value of $350,000 – presumably for the contracting and construction itself.

In a follow-up post on the thread, one user said they were at the Tejon site Monday morning, and saw a “flatbed truck with supercharger equipment ready to be installed.”

While earlier reports showed Tesla using pre-fabricated Superchargers to streamline construction at a Beaver, Utah station, the user mentioned later in the thread that those arriving to the Arvin Tejon station were not pre-fabricated chargers.

I was there this morning and I saw a flatbed truck with supercharger equipment ready to be installed ?

A Tesla Lead also announced last month that energy generated for Tesla’s Superchargers will be 100% renewable in 2021, marking a major step forward in reducing the company’s carbon footprint.