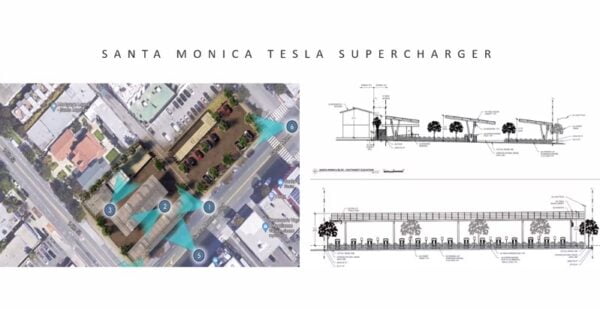 After a proposal to build a 62-stall Tesla V3 Supercharger passed in Santa Monica, the future of the project was thrown into murky water after the City Council used a zoning loophole to delay the proposal’s full approval.

On Friday, however, the Santa Monica Supercharger project was given new life by the council, with the plans prepared to move ahead after all.

Following approval, the facility is construction is expected to move forward as soon as possible.

Derrickson continued, “In total, we have 29 Tesla employees who work in Santa Monica today and plan to double that in short order when our new service center opens in July. Additionally, we’ve been collaborating for over a year now with the city on a Tesla electric vehicle charging station in Santa Monica’s Mid-City neighborhood.”

Original council concerns of being able to develop the land for other uses, specifically those that are mixed-use facilities rather than wasteful land use of a surface parking lot, later prompting Tesla to thank Councilmember Kevin McKeown, as the company agreed to work towards a compromising solution following the vote.

Derrickson said, “You have flagged several good points over the past couple of months and we’re interested in working with you and others in Santa Monica to figure out what types of solutions might be better, moving forward, for our EV charging stations.”