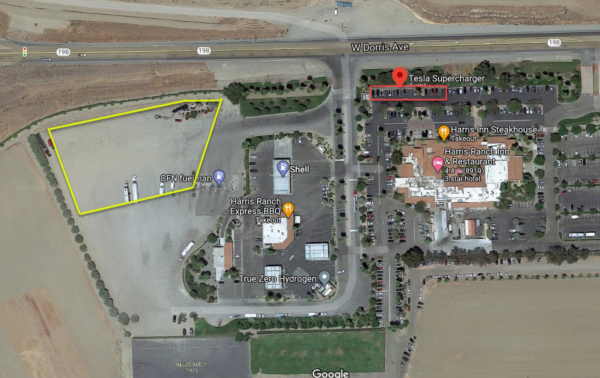 On Friday, a Fresno County permit revealed Tesla’s plans to install as many as 80 new Supercharger stalls at its Harris Ranch location, set to become the world’s largest V3 Supercharger station (via @montrealTesla on Twitter).

The permit also details plans for a newly paved parking lot for truckers, a huge solar canopy like the one at Firebaugh, and a construction valuation of $1.3 million (USD).

This will be the world’s largest Supercharger. At least EIGHTY V3 stalls (per my sources) are coming soon to Harris Ranch, in addition to the 18 existing stalls. There could even be Megachargers onsite, from what I know.@elonmusk pic.twitter.com/bX1nFqZqBZ

In addition to the expansion, many commenters speculate as to whether the Harris Ranch Supercharger site will have Megachargers, though nothing of that nature was included in the permit.

Another V3 Supercharger station in Santa Monica was set to become the world’s largest V3 charging station with 62 stalls, but was later halted through a zoning loophole, despite City Council already having voted to approve the project.

While there’s still much work to be done on the electrical grid before states like California can reach goals of going all-electric, the expansion of Tesla’s Supercharger network – and the EV charging network in general – is also an important step, especially on the path to widespread adoption of zero-emission vehicles.