Another Tesla Model Y Price Increase is Here, Jumping Up $500 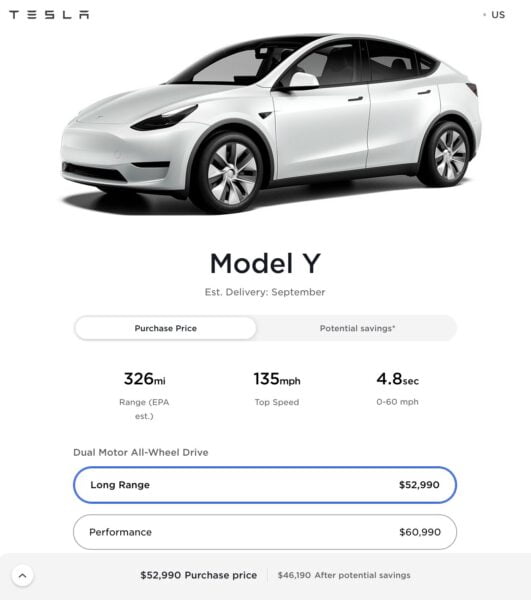 Tesla has raised the price of the Model Y Long Range All-Wheel-Drive variant, by another $500, according to the company’s online order configurator (via @Tesla_Adri).

The move comes again comes about two weeks after a previous $500 USD increase for the model, making the Long Range base price come to a total of $52,990 (USD). The Performance Model Y remains unchanged at $60,990 USD.

Looks like another price increase for the model y LR AWD.
Up another $500. pic.twitter.com/I2PASgG6IW

The news comes amidst an ongoing supply chain semiconductor shortage that affected most automakers and electronics manufacturers around the world in recent months.

Tesla is currently constructing new Gigafactories in Grünheide, Germany and Austin, Texas, both set for completion this year. These will come in addition to the company’s production facility completed last year in Shanghai, China, along with its current operational factories in Fremont, California and Sparks, Nevada.

Demand for Tesla’s vehicles is also high amidst a burgeoning EV market with increasing competition, and one in which Tesla’s deliveries are estimated to be at least a few months out.

Earlier this month, Tesla CEO Elon Musk announced that an AI Day event will happen in July or August, at which the company plans to break down AI software and hardware progress updates.

Tesla has informed local government officials in Gruenheide, Germany, that it is putting plans for a 50 gigawatt-hour battery production facility at Gigafactory Berlin on the back burner. The automaker will instead divert resources to increasing battery production at its U.S. Gigafactory in Austin, Texas, faster than originally planned, reports Automotive News. “The EV maker […]
Nehal Malik
20 hours ago