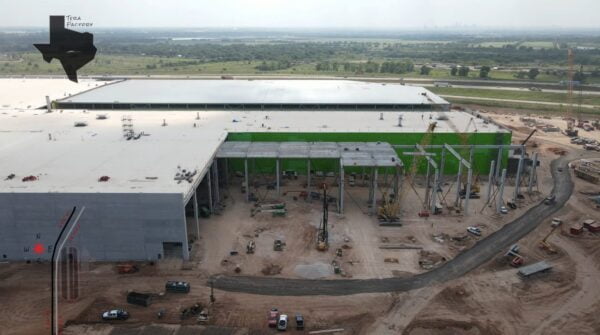 Tesla fans are patiently waiting for the company’s Gigafactory Texas to be completed since it will be Tesla’s first factory to produce the highly-anticipated Cybertruck electric pickup truck.

In a new video shared by Terafactory Texas we can see updates to Tesla’s Gigafactory Austin construction site, including new work in and around the site’s roads, as well as new updates to the GigaPress area, among other new developments.

The northbound intersection near the factory looks to have received a new turning lane, which could be used for direct truck access or as a third lane. Tesla’s Gigafactory Texas also saw a number of updates to the GigaPress area, the GigaPress being a giant casting machine, including additional horizontal crossbeams for the roof, as well as a number of new Double Tees that are smaller than the ones previously installed.

Tesla’s Cybertruck has been spotted driving around the Texas site in recent months, signaling that production must be nearing its end. The electric truck was also on display in New York City for about a week last month, while the Gigafactory Texas factory has already produced the first diecast Model Y body – signaling that it is indeed nearing production.