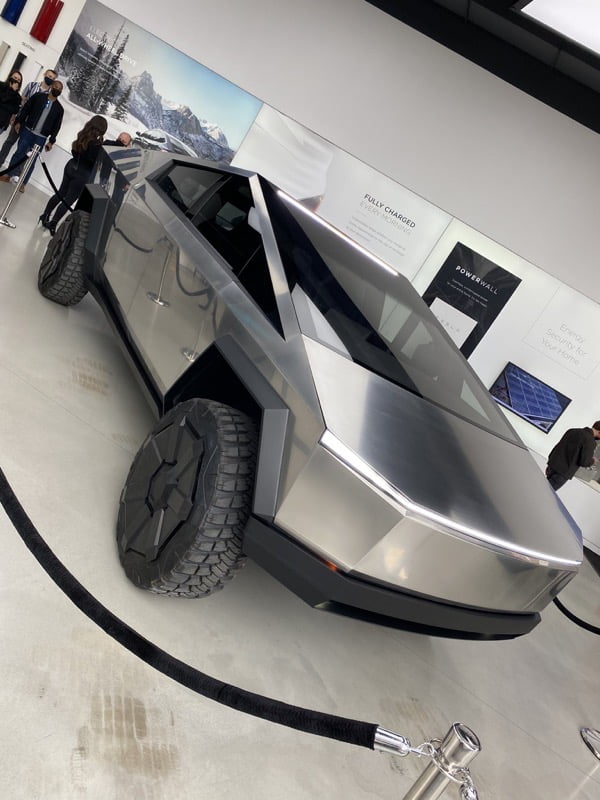 Tesla has its Cybertruck on display in New York City, and will allow people to visit the futuristic truck at the Meatpacking District, located at 860 Washington Street.

The appearance of the company’s Cybertruck comes on the eve of CEO Elon Musk’s hosting of Saturday Night Live, set for tomorrow.

Musk confirmed the Cybertruck will remain in New York City until Sunday. You can see some more images below shared by @stevenbrnnn:

The Cybertruck is visiting the meat packing district ahead of @elonmusk appearance on @nbcsnl pic.twitter.com/kxKDecpJk3

Here’s a clip of the Cybertruck leaving the showroom, as per @OwenSparks_:

When Sparks asked Musk how long Cybertruck would be in NYC for, Musk said “until Sunday”.

Some more clips of Cybertruck below:

I love the sense of humor of Tesla employees 😂

Anyone who’s visiting Cybertruck tomorrow get there early! They are putting up fencing, sure to be long lines to meet the beast! https://t.co/0yigHp8XNS

For those looking to check out Tesla’s Cybertruck tomorrow, you’ll need to prepare to get there early, as fencing is being put up, in what is expected to be long line ups to check out the electric pickup.

Tesla reported record Q4 2022 earnings today and the automaker also provided an update on its upcoming Cybertruck. According to Tesla, it says “Cybertruck remains on track to begin production later this year at Gigafactory Texas. Our next generation vehicle platform is under development, with additional details to be shared at Investor Day (March 1st, […]
Sarah Lee-Jones
22 hours ago