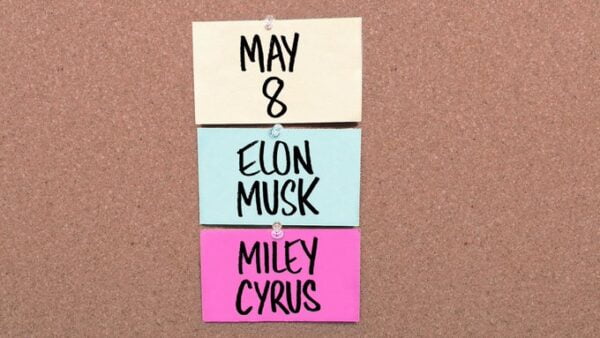 Saturday Night Live announced a special pair of guests for its May 8 broadcast, and as the weekend approaches, talk around the showing is heating up.

The clip below shows Musk saying he’s hosting SNL this week and that he’s a “wild card so there’s no telling what I’m going to do.”

In the second clip, Musk was asked what’s new and he replied, “I just had a successful launch this week”, referring to SpaceX and its recent successful rocket launch Starship SN15.

A recent rise in Dogecoin occurred after it was announced that Musk would be hosting the comedy show, with many traders of the meme cryptocurrency not wanting to miss the action involved with the upcoming performance.

After the announcement, Musk went on to dub himself the “Dogefather” to promote the upcoming performance.

In a recent visit to New York City, Musk was asked if he had plans to do jokes about Dogecoin by the press on the street, in addition to whether he planned to do any impressions or other bits.

Earlier this week, Musk was ordered by a judge to turn over documents and communications relating to his $55 billion compensation plan, which some shareholders argued was “unjust compensation” that breaches financial responsibilities to the company and investors.

Tesla Model Y buyers in Australia could bring the SUV’s price down by as much as $10,000, making it as affordable as the Mazda 3 with a new tax deal, according to The Driven. To achieve this level of savings, buyers must qualify for a combination of incentives including the country’s new fringe benefit tax […]
Peter McGuthrie
60 mins ago

Update: According to Electrek, the site claims Annex is not a real company and the so-called Tesla deal is actually fake. U.S. automaker Tesla is preparing to take hold of its own semiconductor chip supply in China, with a new partnership surfacing to help increase electronics supplies. Tesla is partnering with Swedish chip manufacturer Annex […]
Peter McGuthrie
3 hours ago

A revamped Model 3 is under development at Tesla, according to four people familiar with the plans in a report from Reuters on Monday. The updated model, dubbed “Highland,” is expected to decrease overall complexity and reduce the number of components in the Model 3’s interior. Additionally, the new Model 3 will focus on factors […]
Peter McGuthrie
3 hours ago