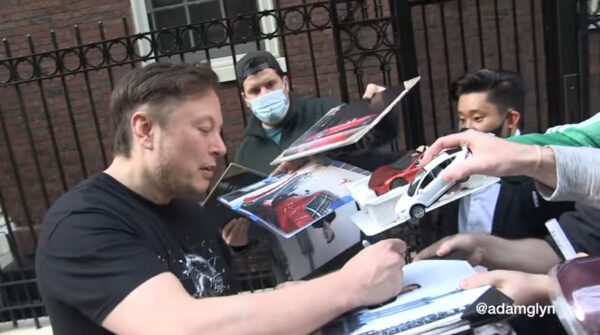 In a video from Adam’s Apple on Wednesday, Tesla CEO Elon Musk was spotted on the streets of New York and signed autographs while being asked questions by a group of people (looks like paparazzi too, of course) about his upcoming Saturday Night Live performance with Miley Cyrus, and Dogecoin, among other things.

In recent weeks, Musk claimed the title of “Dogefather,” in advance of the upcoming appearance on SNL. Musk has also recently asked onlookers for skit ideas, and has put forth the ideas like “irony man” and “baby shark tank,” which could end up a part of the evening on SNL. The joint SNL appearance for Musk and Cyrus is expected to air May 8.

Earlier this week, a judge ordered Tesla to share documents for Musk’s $55 billion compensation plan, following up on a 2018 complaint against Tesla which posited that the company’s Board of Directors had betrayed investors by offering Musk such a lucrative compensation package. While Musk is currently able to purchase stock option tranches at a very low stock price, effectively increasing his wealth by billions of dollars each time, it’s unclear if the judge will find the practice unfair to shareholders.

Musk has also been known for his philanthropy and charity, like the $30 million he recently gave the Cameron County School Districts, alongside a number of other causes he has supported throughout the years.