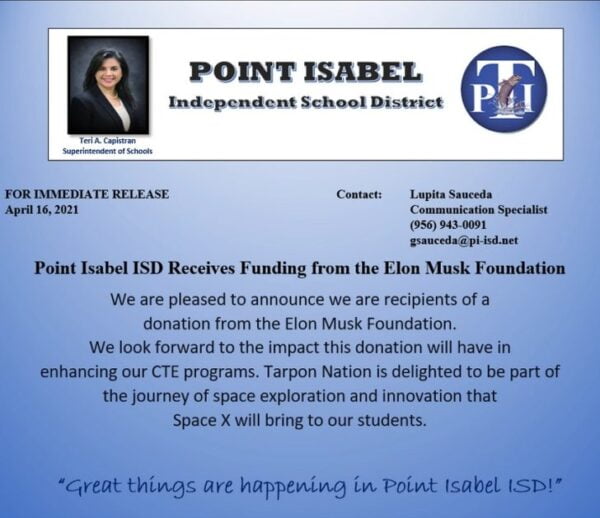 A few weeks ago, SpaceX head Elon Musk announced plans to donate $30 million (USD) to Cameron County, Texas, and the city of Brownsville, according to Valley Central. Musk stated that $20 million was set to go towards schools, while $10 million is planned to help revitalize Brownsville’s downtown area.

Last Friday, Point Isabel Independent School District (Point Isabel ISD) Superintendent Teri A. Capistran announced that Cameron County had received the first round of funding from the Elon Musk Foundation, totaling one-fourth of the total donation at $5 million. The first $5 million was distributed to schools in the area, based on enrollment data, with about $123,000 going to Point Isabel ISD.

Am donating $20M to Cameron County schools & $10M to City of Brownsville for downtown revitalization. Details to follow next week.

In the announcement about the donation, Point Isabel ISD wrote, “We are pleased to announce we are recipients of a donation from the Elon Musk Foundation. We look forward to the impact this donation will have in enhancing or CTE programs.” The announcement continues, “Tarpon Nation is delighted to be part of the journey of space exploration and innovation that SpaceX will bring to our students.”

Cameron County is Texas’s southern-most county, and it’s also home to Boca Chica Village, where SpaceX frequently launches its Starship rockets. Musk also recently moved from California to Texas, perhaps indicating such a move of support for the lower-Texas region.

In January, Musk also donated $5 million to the Khan Academy, an educational non-profit, which features online video classrooms in a variety of topics for children of various ages. Last year, Musk and Tesla also donated several N95 masks to healthcare facilities at the beginning of the COVID-19 pandemic.