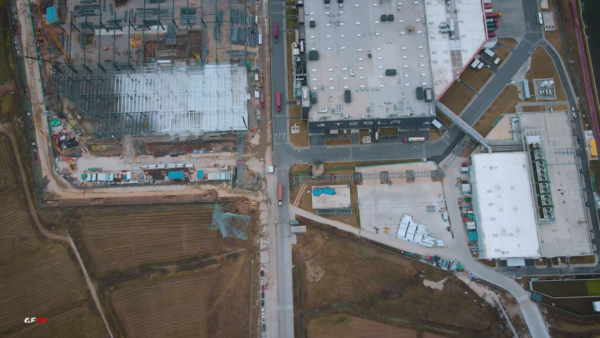 We recently saw the inside of Tesla Gigafactory Shanghai’s assembly department, which gives viewers a better idea of what happens inside the relatively-new factory.

In a video uploaded Wednesday by YouTube channel WU WA, we can see aerial drone footage from above Tesla’s Gigafactory Shanghai. The video features a regular drone flight above the factory, with the final section of the video depicting an exciting top-down view of the Shanghai site, showing the factory’s exact layout from about a third of a mile directly above.

The view of the factory is one of the more unique drone videos we’ve witnessed, despite a number of drone videos to come out since construction began on the site.

Recently, one executive from Tesla China claimed that the $25,000 Tesla, which was announced at last year’s Battery Day event, would initially be built at Tesla China and sold worldwide. The vehicle will come from the company’s in-progress Research and Design (R&D) Center.

Tesla was also recently summoned by the Chinese auto regulator over a number of quality control issues. The company followed up with a response, saying it would “strictly abide by Chinese laws and regulations.”

You can watch WU WA’s full top-down drone video of Gigafactory Shanghai below.

Tesla has changed its estimated delivery times on all models in China, with the order configurator page now saying all Model 3 and Y trims will be delivered in “December 2022” (via @Tslachan). Previously, each trim and model displayed one to five weeks for estimated delivery. The change comes as Tesla seemingly pivots to focus […]
Peter McGuthrie
1 hour ago