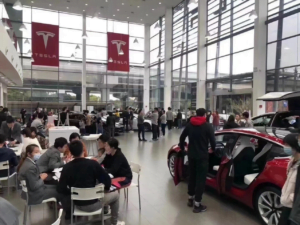 A shot inside Tesla Shanghai store on November 2nd, 2021, the day of Shanghai’s “outside the city” policy passing. Photo: Twitter user @ray4tesla

It looks like the US market regulator is no longer the only government questioning Tesla’s quality control standards.

China’s State Administration for Market Regulation (SAMR), along with four other Chinese government departments, has called upon Tesla to inspect complaints lodged against the vehicle company’s safety and quality control standards, according to the Global Times, the news outlet from the Chinese Communist Party.

In a statement responding to the summon, Tesla wrote, “We will strictly abide by Chinese laws and regulations and always respect the rights and interests of consumers.”

If the SAMR finds faults in Tesla’s production and quality control, then the company may be forced to recall a number of vehicles in China, just like it has had to recall cars in the US a number of times in recent months.

It’s most likely there is no coincidence Tesla allowed an extensive media profile of its Gigafactory in Shanghai recently, to counter these government allegations.

Despite the criticisms, Tesla is currently the world’s most valuable automaker and sold 15,484 China-made vehicles last month. The company’s Model Y compact SUV is seeing intense demand in China, with deliveries still months away.