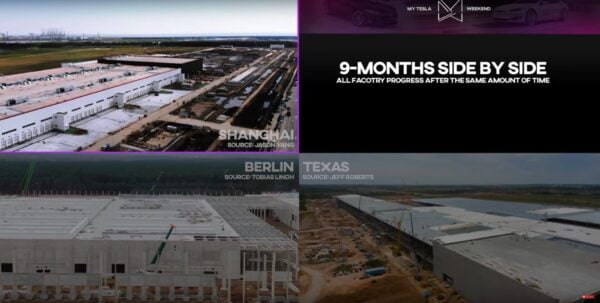 My Tesla Weekend released a video Thursday featuring progress from all three of Tesla’s ongoing Gigafactory construction projects with a 9-month, side-by-side look at the build progress of each. The video compiles shots from Gigafactories Shanghai, Berlin, and Texas (U.S.) captured by Jason Yang, Tobias Lindh, and Jeff Roberts.

The video’s host mentions that, while Gigafactory Shanghai’s 9-month progress has, by far, been the quickest to start production, they go on to explain that the arc is more complicated than that – Tesla’s lack of resources during Phase 1 of Gigafactory Shanghai’s construction created uncertainty about the company’s future.

Each of the Gigafactory’s began construction prior to Tesla’s entry into the S&P 500, or before the company’s shares (TSLA) touched $900 in January.

While Gigafactory Berlin currently awaits approval for completion, Tesla plans to enter production at the Gründheide, Germany site by July. Gigafactory Texas is well on its way to completion, with the Tesla Cybertruck rumored to start production in June.

Alternatively, Tesla’s Gigafactory Shanghai has been producing Model 3s and Ys for several markets around the world since last fall, and we’ve even gotten a chance to see the inside of the Model Y production facility.