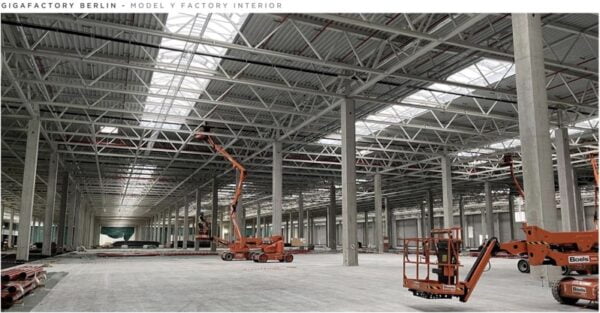 Starting production at Tesla’s Gigafactory Berlin was originally slated for July, but requirements from the German government’s Federal Immission Control Act, which holds that certain deadlines must be met during a facility’s construction and licensing processes, according to Handelsblatt.

In a statement to the publication, a Brandenburg Economic Minister said that if it were the most complicated form of the licensing process, Tesla could be looking at another “three months” before production may be able to start.

Brandenburg’s Minister of Economic Affairs Jörg Steinbach said, “If it were to be the most complex form of interpretation, then we are at three months.”

Earlier this month, Tesla slammed the German government for its slow approval process in a letter, saying that “The German approval framework … contradicts the urgency to plan and realize such projects that is necessary to battle climate change.”

While the letter from Tesla detailed plans to have its Gründheide, Germany factory in a production phase by July, Handelsblatt reported recently that a spokeswoman for the Ministry of the Environment in Potsdam was under pressure from Tesla, including that the licensing authorities should take all the time they need for the approval process.

The spokeswoman told the publication it was “possible that third parties have expectations that the process will proceed more quickly,” but that the licensing authority was tasked with “[giving] their employees as much time as necessary for this.”

Before the slow approval process, Tesla’s Gigafactory Berlin construction process has been riddled with slow-downs, including process disruptions due to the loss of an overseeing manager, the company’s deforesting displacing hibernating snakes, and a €100 million unpaid security deposit. The site has also been a major source of division amongst German’s, over the extent of Tesla’s Gründheide, Germany facility’s environmental impact.

With Tesla’s regular software updates come gradual improvements, and one new version builds off of the automaker’s recently improved navigation system in its vehicles. Tesla added suggested destinations in its software update version 2022.28.2, as detailed in a report on Wednesday from Not a Tesla App. In the report, the publication notes a user named […]
Peter McGuthrie
22 hours ago

As Tesla continues with plans to open its Superchargers to non-Tesla vehicles, the automaker plans to shift its charging rates and times at certain locations. Tesla is updating its charging rates at select Supercharger locations starting on Wednesday, September 28, according to tweet spotted by @Whole Mars Blog. In the screenshot, Tesla says that users […]
Peter McGuthrie
22 hours ago