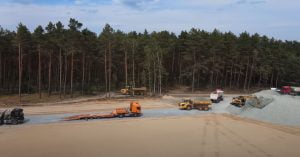 Real snakes have complicated the building process at Giga Berlin, and CEO Elon Musk is likely not as keen on the sound of snake jazz as he once thought.

On Monday, a German court ordered Tesla it needed to suspend its deforestation process at Gigafactory Berlin, due to environmentalist claims that cutting down more trees might disturb hibernating snakes. The news, as reported by Reuters, will certainly slow down Tesla’s process of building the Berlin factory, and it’s unclear when Tesla will be able to continue moving trees.

Germany’s state environmental authority, the Landesumweltamt, must be consulted in order to continue moving the deforestation process forward.

$TSLA Elon Musk's plans near Berlin. A German court has told the U.S. billionaire's electric vehicle company Tesla to suspend the clearing of a forest at the site of the proposed factory in Gruenheide after environmentalists said that cutting down more trees could endanger snakes

A spokesman for Frankfurt’s administrative court said, “The Landesumweltamt and Tesla will now be consulted, they need to make submissions by this afternoon and then we assess the situation.”

Hey, at least there aren’t snakes on a plane, right? #samjackson

Tesla has faced criticism over environmental concerns in the past, specifically from residents of Brandenburg, the Berlin suburb in which the factory is being built. Residents shared criticism of the construction site just a few months ago over the site’s resource use. Over the course of eight days following the hearing, Tesla followed up with locals and critics of the factory, who ultimately lodged a total of 414 complaints against the company and its resource use.

In any case, Tesla’s environmental concerns are not new. While the company does represent environmental justice to the public eye, which is waiting for sustainable transportation to become the norm, the company is also not free of continued environmental criticisms – not the least of these which comes from Elon Musk’s favorite species of musicians.

Tesla CEO Elon Musk recently met with French President Emmanuel Macron to discuss the “manufacturing of electric vehicles and batteries,” among other things. “In line with our ambition for decarbonizing and reindustrializing France and Europe, with @elonmusk we exchanged on future green industrial projects, such as manufacturing of electric vehicles and batteries,” President Macron said […]
Nehal Malik
16 hours ago