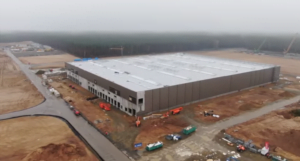 Tesla’s Gigafactory Berlin is under fire from environmental activists, according to the Guardian, especially after being ordered to halt building following the company’s choice to remove trees and build without the proper licensing.

Local residents of the Berlin suburb of Grünheide, where the factory is being built, are split on whether Tesla should be able to continue building the Gigafactory, which is expected to put Grünheide on the map in spite of irreversible environmental damage.

One young man, Silas Heineken (Tesla Kid on YouTube), has been sharing his enthusiasm for the project through drone videos, though he was recently almost arrested on the Gigafactory site back in April.

However, with the blessing of Tesla CEO Elon Musk, saying “fine by me”, drone flights over Giga Berlin were allowed to continue.

They’re trying to get Tesla to give him permission to keep flying. He had good videos ?‍♂️ https://t.co/cff8Ncu5gl

Others have not been so adoring of Tesla’s presence in the small German suburb.

Werner Klink is a member of the Grünheide’s citizens’ initiative, which is seeking to stop the building project due to its effects on the local environment. Klink claims that Tesla Musk’s decision to begin building before acquiring the right permits has already caused significant damage to the area’s wildlife.

Klink said, “Grünheide is just a small place of 9,000 souls, bordering a conservation area. Musk’s plans will turn it into a town of 40,000.”

Klink continued, “Even if they told him he would not be allowed to continue, he will have already caused so much damage there’s no way he can take the site back to its original state – immense, irreversible harm has been done to the nature, potentially to the groundwater, to the forest, the flora, fauna. Musk is a risk-taker, that’s what he does, and he’s banked on the fact they’ll never tell him to demolish his building, particularly when so many jobs are at stake.”

Alongside Klink’s disputes, protests in front of the Axel Springer House in Berlin following Musk’s Springer award erupted in December. While Musk won the award for his “ambition to make the world a better place,” climate activists seem to have a different message for the CEO.

Local criticisms of Tesla’s operations have been growing steadily since early on in the construction project, and construction has halted multiple times for both related and unrelated reasons.

With mounting criticisms of Musk and Tesla’s environmental behavior, the Gigafactory in Grünheide may be forced to be demolished, at least in part, if the building project cannot receive the proper licensing for structures it has already built. But at this point in time, it doesn’t look like that is going to happen.