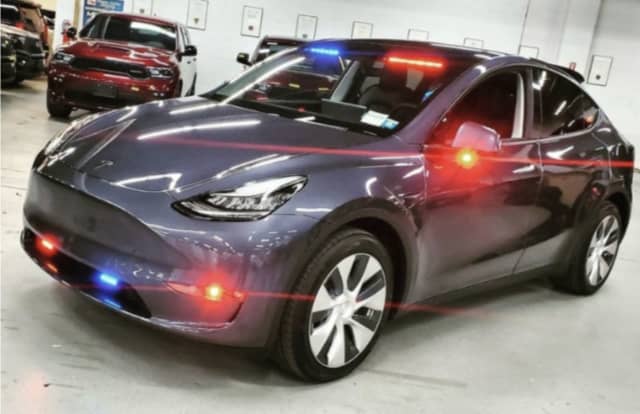 On December 21, the police department said, “Hastings PD introduces the first police outfitted Tesla Model Y in the US!! The Hastings PD took delivery of a brand new Tesla Model Y today! It will [serve] as the police car assigned to the Detective Division.”

“This is the first Model Y that has been outfitted with lights, sirens and radio for police use – in the whole country (maybe even the world!). Keep an eye out for our new ride,” explained Hastings PD.

More pictures of the Model Y police vehicle can be seen below, showing the spacious trunk, along with the front trunk (frunk) also full of police gear.

The police department is the first in the Westchester County area to add a zero-emissions, fully electric car to its fleet, but certainly not the first in the U.S. to be seduced by the fuel savings, low maintenance costs, and carbon neutrality — Eden Prairie in Minneapolis, Minnesota, already has one Model Y for a squad car, and Spokane, Washington, is now looking to get four.

The Tesla Model 3 is also a popular choice for police departments, with the Holland Department of Public Safety in Michigan and the Westport, Connecticut, police department both cruising down streets in the uber safe Tesla electric vehicle (EV).

The Hastings-on-Hudson Police Department’s new Tesla Model Y was tricked out into a police squad car by Fleet Auto Supply in West Haven, who fitted the EV with Whelen CenCom Core Lighting Technology.

The Tesla Model Y boasts a 5-star safety rating, and its All-Wheel Drive makes for impressive performance in the roughest of terrains and poorest of weather conditions.

The police department expects to see $8,525 USD in fuel savings over the next five years thanks to the decision.

It’s also worth noting Spokane Police in Washington State, also plan to add the Tesla Model Y to its fleet.

With Tesla’s latest 2020.48.26 holiday software update–and the new boombox feature–this police cruiser has the potential to be even more badass.

Tesla will reportedly cut prices of its Model 3 and Model Y in China soon, if unnamed sources speaking with Huxiu are to be believed (via CnEVPost). The publication says a source indicated that Model Y may see a price cut by up to 40,000 yuan ($5,610 USD). Entry Model Y RWD prices may drop […]
Sarah Lee-Jones
23 hours ago