How Tesla Used Glass to Make Model 3 the Safest Car in the U.S. [VIDEO] 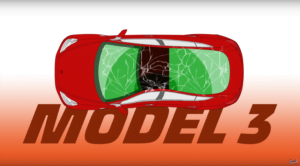 While we don’t always think about the safety ratings in our cars first and foremost, it is perhaps the most important factor in any car a person drives. It’s often neglected, and yet, Tesla fans have some things to be thankful for in this department.

In a new video released Wednesday by automotive YouTube channel Donut Media, the host, Jerry, shows how the use of glass in Tesla Model 3 production helped the electric vehicle (EV) giant create an extremely safe car.

According to the video, the Tesla Model 3 is considered the safest car in the US. To test the theory, Jerry goes on to break down different facets of what makes a vehicle safe and compared the Model 3 with a number of other cars – these include the Ford F-150, BMW’s 3 series, the Honda Accord, and the Volvo S3.

Although the Tesla Model 3 has earned the highest-ever crash test ratings from both the National Highway Traffic Safety Administration (NHTSA) and the Insurance Institute of Highway Safety (IIHS). For the sake of the video, Jerry primarily uses the IIHS model for safety in order to show the Model 3’s safety features.

The Tesla Model 3, having received extremely high marks from both the NHTSA and the IIHS, can reasonably be considered the safest car in the US, and it’s an especially-welcomed title given that it’s also one of the fastest cars in the US.

Tesla’s first software update of this year, 2023.2.0.5, recently started rolling out, bringing new features to the heated steering wheel and Sentry Mode, plus more But there are also some undocumented changes as with most software updates, according to tips sent to Not A Tesla App. One of them was the new ability to view […]
Peter McGuthrie
30 mins ago

Tesla has added a “camera preview” feature to the vehicle’s service menu, as spotted this week by @Stian Walgermo. The feature came as an update to Tesla’s software in version 2023.2.0.5, most of the new features of which were simply minor fixes. The feature shows a simple view from the camera, without having to use […]
Peter McGuthrie
5 hours ago

Recent weeks have brought on conversations about Tesla’s price cuts in markets around the world, and now the automaker is pushing a new message on its website for Model 3 leasing. Tesla’s Model 3 is now leasing at prices as low as $399 per month, according to a change on the automaker’s website yesterday, notes […]
Peter McGuthrie
6 hours ago