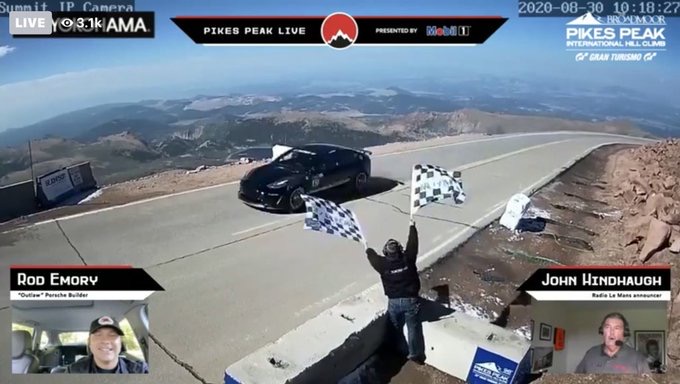 Tesla’s Model 3 can now claim victory at the famed Pikes Peak Hill Climb. Blake Fuller drove a 2018 Tesla Model 3 to first place in the Exhibition Class, with a time of 3:13:569.

But in second place was another Tesla Model 3, the 2020 Unplugged Performance driven by Randy Pobst. What makes this second place victory amazing is the fact Pobst crashed his Model 3 on day two, only to have the team assisted by Tesla repair the vehicle in time for the race today, posting a time of 3:16.857.

We did it! Randy made it to the top! We came to Pikes Peak to challenge breaking the 10 minute barrier. Before the crash we were #9 fastest of the entire field and near identical times to the Porsche 935. Bent frame and totaled car didn’t stop us and we made it to the top!@Tesla pic.twitter.com/EEhUGz57li

Blake did it!! #ElectricPerformance #Tesla Racing Team #1 in the Exhibition class at #pikespeak 2020! Congratulations Team!! pic.twitter.com/dm4Y364uLE

doh!! knocked to second by a porsche pic.twitter.com/zKCICMjLHO

In terms of overall times, a 2018 Porsche GT4 Clubsport in the Porsche Trophy by Yokohama class had the fastest time today of 3:09.892, with Fuller’s Tesla Model 3 time being the second-fastest, followed by Pobst.

Tesla Model Y units in the company’s new “Quicksilver” color have started making their way to showrooms across Europe, just a few weeks after the first units with the new paint option were spotted outside Gigafactory Berlin-Brandenburg. Electric vehicle (EV) enthusiast Lasse Edvardsen (@nasalahe) on Saturday shared images of a Quicksilver Model Y Performance on […]
Nehal Malik
6 hours ago

A Tesla Model 3 with a camouflage cover on the front and rear was recently spotted at a parking space in Santa Cruz, California (via @omg_tesla). What’s going on here? @klwtts @WholeMarsBlog @teslaownersSV pic.twitter.com/uFpxcsVh4D — omg_Tesla/Rivian (@omg_tesla) December 3, 2022 The electric vehicle (EV) seemed to have factory plates, indicating that it is part of […]
Nehal Malik
8 hours ago