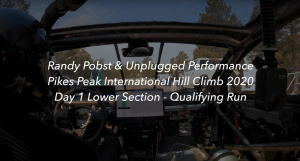 In a new video released by Unplugged Performance Sunday, viewers can see Randy Pobst’s qualifying run in the Pikes Peak Lower Section, achieved with a Tesla Performance Model 3. The run, clocking an stellar 4:12 time, remained untouched throughout the day.

The Pikes Peak International Hill Climb is a 100-year-old annual event, and this is only the fifth year a Tesla has raced.

According to the team, racing EVs is all about being careful with an EV’s range and power, especially on multi-run races such as this. In this particular race, Unplugged Performance and Pobst elected not to participate in every run, in order to conserve battery for the “best run.” The plan was for Pobst to lift off on the straights, however, Pobst surprised the team by going for it instead of lifting off, ultimately proving an impressive first run at 4:15.

While Pobst would go on to keep the top time at Pikes Peak that day, other Tesla drivers Blake Fuller and Joshua Allan trailed just a bit behind, with Allan tying Pobst’s first run at 4:15, and Fuller running a bit more slowly at 4:38.

The Model 3 has both its roof and windshield glass replaced to lower the weight of the electric vehicle, saving 55 pounds.

This morning, however, looks like the Tesla Model 3 got into an accident and looks to be done. Randy is okay from the accident though. This means Blake Fuller as the lone Model 3 driver to represent EVs at Pikes Peak.

Randy is ok. The Model 3? Not so much. @UnpluggedTesla #PPIHC #PPIHC2020 pic.twitter.com/TqhWoS97xH

A post shared by Out of Spec Motoring (@outofspecmotoring)

With Battery Day in less than a month, it’s difficult not to speculate as to what next year’s Pikes Peak International Hill Climb will look like with improved batteries on the Teslas. One thing is for sure: we’re already expecting a marked improvement over this year, and we think Randy Pobst would agree if you asked him, but sadly his Model 3 is out the race.