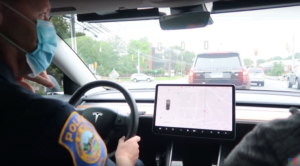 Along with Holland, Michigan police officers opting into Tesla police cars, many communities have the opportunity to use the electric vehicles (EVs) in their law enforcement agencies. Among them is Westport, Connecticut Police Department.

In a video released earlier this month, YouTube channel Now You Know shared a video with a ride-along in a Westport officer’s Tesla Model 3. In the video, hosts Zac and Jesse talk and ride with Police Chief Foti Koskinas.

Koskinas and other officers talk about several elements of the car, including its speed and range, as well as the use of the frunk and the trunk.

In practice, Tesla Model 3s stand to save up to $6,755 per month next to Dodge Chargers in gas, oil, maintenance, and other extraneous costs. Because of this, it’s no surprise that police departments are also looking to go electric.

Despite the impressive savings, not every police department can afford Tesla Model 3s for their unit, and it’s tough to say what that kind of money could do to help other areas of need. Still, a Tesla seems like the perfect vehicle for the needs of any cop.