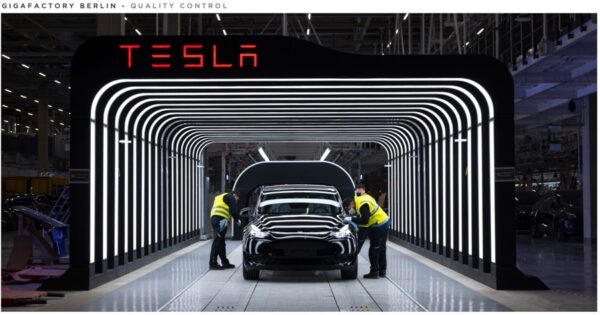 With Tesla’s more-efficient 4680 battery cells beginning to make headlines in North American markets, onlookers in Europe are still awaiting theirs — though tests show that they may not have to wait too much longer.

Tesla’s Gigafactory Berlin-Brandenburg produced its first Model Y SUV with the next-generation 4680 battery, according to a report from the German publication Tesla Mag on Friday.

As Tesla works to upgrade production lines for increased output, the automaker has also been testing innovations on the Model Y, including the 4680 battery structural pack, as detailed by a person familiar with the matter, claims the publication.

The German-made Tesla Model Y with a 4680 battery is only a test vehicle the person said.

Still, the automaker also scheduled test production of a second version of the pre-production vehicle on Friday.

In May, Gigafactory Berlin was producing just 86 Tesla Model Y units per day as it continued to gradually ramp-up production.

Tesla was approved in Germany to sell a number of test vehicles it built during its pre-production testing period.

Tesla has changed its estimated delivery times on all models in China, with the order configurator page now saying all Model 3 and Y trims will be delivered in “December 2022” (via @Tslachan). Previously, each trim and model displayed one to five weeks for estimated delivery. The change comes as Tesla seemingly pivots to focus […]
Peter McGuthrie
5 mins ago

Long-term vehicle rental service Autonomy has launched an end-of-year sale that lets users subscribe to a Tesla Model 3 for what it is calling the “lowest price anywhere” for the electric sedan. Customers need to put down a $3,000 deposit and then pay $450 per month for the first 12 months, said Autonomy earlier this […]
Peter McGuthrie
52 mins ago

The Tesla Model Y earned the title of News AU‘s 2022 Car of the Year, following testing of eight different gas and electric vehicles on Australian roads. The outlet notes the Model Y’s 450km driving range, its roomy cabin compared to gas cars, its brisk acceleration and its sharp steering as a few of the […]
Peter McGuthrie
1 hour ago