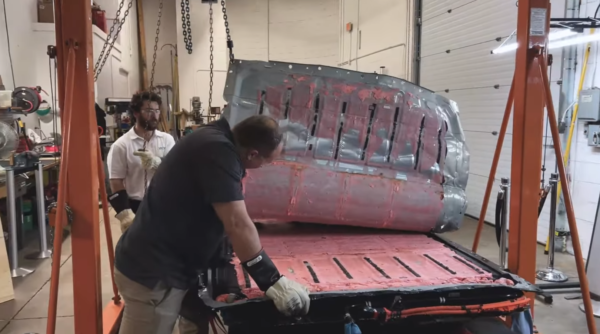 After Munro & Associates stated that opening the Tesla Model Y’s 4680 battery cell was “more difficult than they thought,” the team has officially managed to open the structural battery pack as shown in the crew’s newest video.

Munro Live shared a video on Wednesday with the 4680 battery pack finally fully opened, showing the inside battery cells within the structural pack, covered in pink adhesive.

In the video, Sandy Munro mentions that other channels noted a solution the team can use to dissolve the pink glue and expose some of the other hardware inside.

Munro compared the filling in the battery pack to a brick of cement, emphasizing its protective elements from the aluminum and surrounding electrical — which Munro says the team is extremely careful about.

Additionally, Sandy points out a tube near the battery pack’s outer edge for which the team couldn’t figure out the purpose.

Munro also points out the lines where the longitudinal battery configuration are divided, giving viewers a rough idea of how the actual battery cells lay together beneath the pink glue.

The beginning of the teardown, shared in a video earlier this month, showed the team that the inside was fully covered in the pink insulating glue with the cells themselves inside.

You can watch the full teardown of the 4680 battery cell’s lid below.

The U.S. Securities and Exchange Commission (SEC) has launched a probe into Elon Musk for his role in directing the branding around Tesla’s self-driving car ambitions — reports Bloomberg. According to the publication, the efforts are part of the regulator’s ongoing investigation into Tesla’s claims surrounding its Autopilot and Full Self-Driving (FSD) features. SEC officials […]
Nehal Malik
22 hours ago