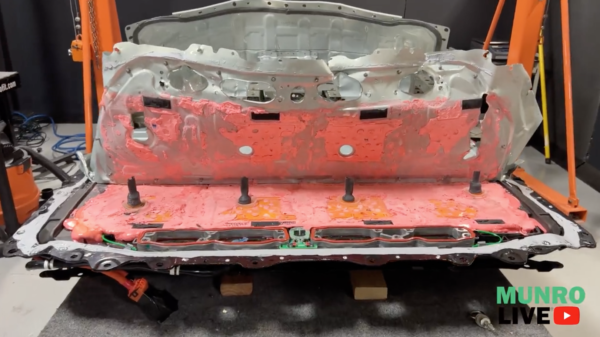 On Tuesday, Steuben and @Munro Live shared an update on the crew’s teardown of the 4680 battery cells, saying that the process has been “much harder than we thought.”

In the post, the Munro Live crew also thanked fans for their patience, as they’re still working on cracking the battery cell pack open after two and a half days of working on it already.

We've got an update from @CorySteuben on the 4680 battery video. Thank you to everyone for your patience as we continue working on cracking open the pack!#MunroLive #SandyMunro #TeardownTitan #EV #Tesla #ModelY #StructuralPack pic.twitter.com/0eoM71h8Lt

Steuben also noted that there are several safety precautions the team must take due to working with the high-voltage pack, also causing the team to need to take their time unveiling the pack’s insides.

He also showed and described the pink glue material that’s surrounding the battery pack, adding that there’s no real playbook for removing this cover.

The video also shows a very small glimpse into the battery pack, in which you can see a tiny sliver of the 4680 batteries.

The company is also offering sales of an individual 4680 battery cell for $800 USD.

Munro Live shared a video earlier this month showing what has changed under the hood in the Texas-made Model Y frunk.