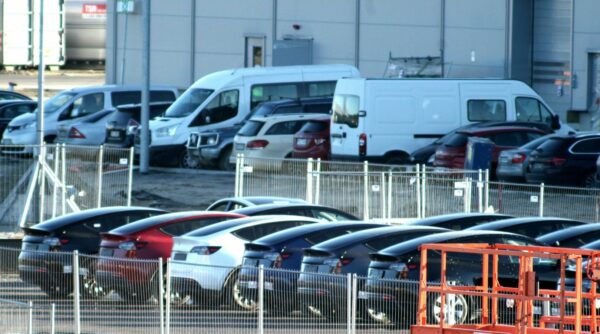 After one viewer spotted 33 Model Y units parked outside at Gigafactory Berlin-Brandenburg, another onlooker has pointed out that the facility may have some new colors in store for European markets.

Five different Model Y units of different colors were seen parked at Gigafactory Berlin on Thursday by @GF4Tesla, including a model each in black, red, white, blue and grey.

While it’s hard to get a clear look at the colors in the photos, they do appear to be a little different than those offered to European buyers in the past.

The new colors will likely come in addition to Tesla’s new deep crimson color at Gigafactory Berlin, as well as the potential for many more as Tesla CEO Elon Musk has claimed Berlin will have the world’s most advanced paint shop.

Tesla submitted final approval documents for Gigafactory Berlin-Brandenburg last month, and is still waiting on the Brandenburg Ministry for full approval of the construction site.

Brandenburg Minister-President Dietmar Woidke also said last month that Tesla’s final permit approval would be coming in early 2022 – so it can’t be much further off at this point.

The U.S. Securities and Exchange Commission (SEC) has launched a probe into Elon Musk for his role in directing the branding around Tesla’s self-driving car ambitions — reports Bloomberg. According to the publication, the efforts are part of the regulator’s ongoing investigation into Tesla’s claims surrounding its Autopilot and Full Self-Driving (FSD) features. SEC officials […]
Nehal Malik
18 hours ago