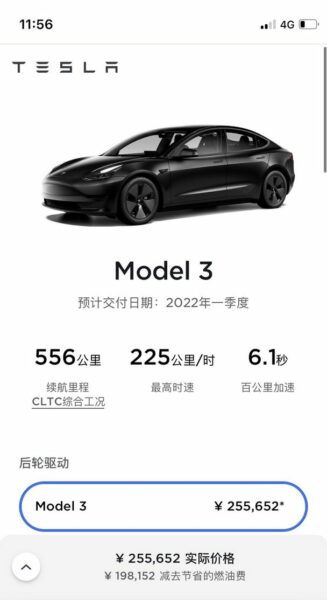 After Tesla increased the price of its entry-level Model 3 in China last week, the company has now again boosted prices on the Rear-Wheel-Drive variants of two of its vehicles.

Tesla has increased the price of its Rear-Wheel-Drive (RWD) variants of both the Model 3 and the Model Y in China, according to @Tesla__Mania.

Can’t find any reference to 12/9 though 🤔😂 pic.twitter.com/o8L4JVvwyM

Despite the price increase, as well as other price increases throughout the year, demand for Tesla’s Model 3 and Model Y units remains high.

In September, the Tesla Model 3 and Y lead China’s luxury auto insurance registrations, with the Model Y even causing backups at registration centers in cities across China during the same month.

Tesla also announced plans to begin delivering the Model Y Performance this week, after some reservation holders have been waiting for as much or more than a year.

In addition, Tesla announced that the Model S Plaid will probably launch in March in China, after the company launched the vehicle in June at a Plaid Special Event in California.

Earlier this month, Tesla also officially added a trunk cargo cover included with the purchase of the Model Y.

Tesla is gearing up for the grand opening of a new two-storey sales center at Ole Rømers Vej 11 in Ribe, Denmark on Saturday, November 26 (via @TSLA_Ownrs_DK).  Grand Opening of @Tesla’s new two-storey center in Ribe, Denmark on saturday, November 26 at 11 am at Ole Rømers Vej 11 🇩🇰⚡️ Come by and test […]
Nehal Malik
3 hours ago