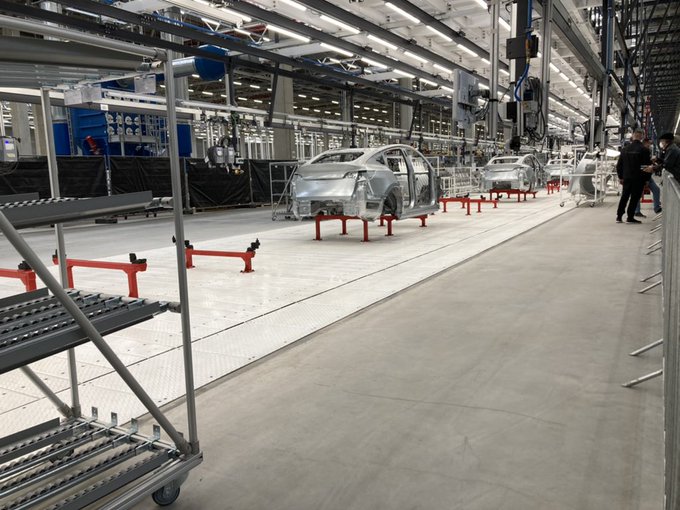 Tesla’s Gigafactory Berlin County Fair is currently underway, and attendees received a public tour of the facility and its production capabilities earlier today. Many of the participants promptly took to Twitter, giving us our first look at Giga Berlin in action.

Come with us we are on the county Fair (Giga Fest)

Last month, Tesla announced the Gigafactory Berlin County Fair event for October 9 in Grünheide, Germany, with only locals allowed to attend. Registrations went live shortly after, and confirmed for the event were a public tour of the Giga Berlin premises and production lines, along with Tesla CEO Elon Musk’s attendance.

Among the most riveting discoveries so far are in-production Model Y units with structural packs and 4680 batteries. Giga Berlin is expected to start piping out market-ready vehicles sometime this month.

We also got some footage of Tesla’s new, fully programmable and adaptive headlights, cheekily configured to spell out ‘Tesla’.

Wow: fully programmable, adaptive headlights on the Giga Berlin Model Y! (See the video in the tweet below.) https://t.co/5YQRmLUiPH pic.twitter.com/0fQVtdn4cT

In addition, an eagle-eyed attendee spotted Giga Berlin’s “easter egg color” for cars, which appears to be the “deep crimson” color Musk called his “favorite” in a tweet last year.

New deep crimson from Giga Berlin is my favorite

While we’ve seen Giga Berlin from the inside before, we’ve never seen it as comprehensively as this. The factory is expected to become fully operational by year’s end.

Take a look at YouTuber the_wolfpack_berlin‘s coverage of his experience at the Giga Berlin County Fair, factory tour included, above, plus another video below: