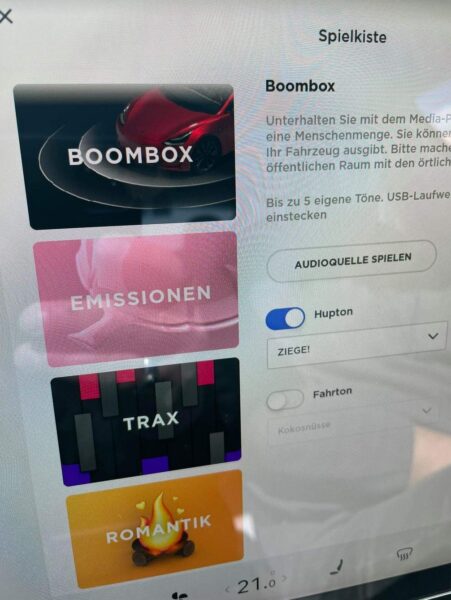 Tesla’s external speaker Boombox feature was unveiled in Tesla’s holiday update in December 2020, and it offers cars built in the U.S. after September 2019 a mandatory acoustic vehicle alerting system (AVAS), which creates artificial noise outside the car to warn surrounding pedestrians and vehicles.

In an update Thursday from @Tesla_Adri, it appears that Tesla’s Boombox feature has become available in Europe for any cars with an AVAS system. Shortly after the announcement, however, Tesla may have restricted the use of the system, because Tesla Adri soon became unable to continue editing the AVAS with custom sounds.

Thanks to @KroegerOve it's now confirmed. Boombox available in Europe for cars with AVAS.@teslamag @WholeMarsBlog @DriveTeslaca pic.twitter.com/psGtZN7RyR

While Tesla’s Boombox will even let you use custom sounds for the external speaker system, you can also download Boombox sounds shared by other Tesla owners, companies, and the like.

Tesla only has speaker installs for European cars built after March 29, 2021, and after September 2019 for U.S. customers, but CEO Elon Musk also said a retrofit for older cars may be possible in the U.S. – with the very same retrofit officially being confirmed as possible through a service center for all Model 3 and Y units.

Since most internal combustion engine (ICE) vehicles make noise on their own, the U.S. regulator requires EVs to produce some sort of sound, in order to warn pedestrians and others nearby of their presence. Otherwise, an EV’s engine is almost completely silent, making it nearly impossible to notice they’re nearby without seeing them first.

Tesla Vehicles Banned From Parking at Some Government Offices in China, Report Says