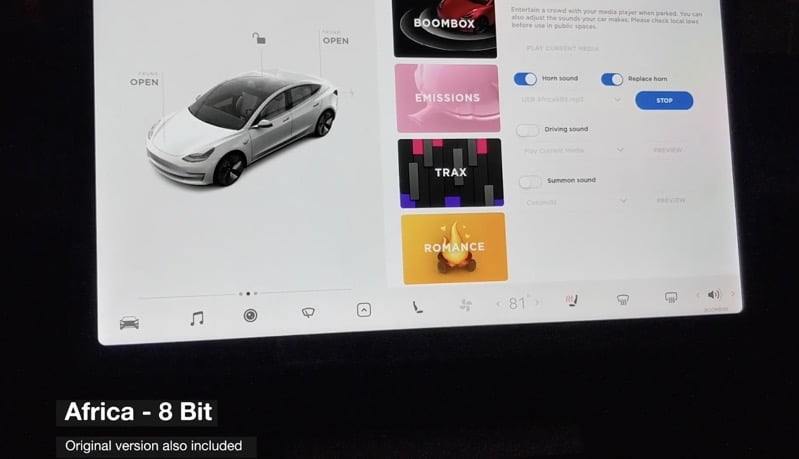 If you’re looking to download custom sounds for Tesla’s Boombox feature, owner Chris Whitton has created a compilation of 70 MP3s to get you started right away.

The following video demonstrates all 70 sounds he put together, which includes a variety of songs, sound effects and more, including the likes of Toto’s Africa, Mario Kart race countdown, Tomfoolery from Spongebob, Wii Shop and more.

Click here to learn how to setup custom Boombox sounds in your Tesla, which requires the 2020.48.26 software update, and a build with pedestrian speaker.

Essentially, you need to format your USB stick to exFAT, name it ‘BOOMBOX’, and only place a folder in the root titled ‘Boombox’ with the custom sound files inside. Then, just plug in the USB stick into your Tesla’s USB port to access the files within the Boombox feature.

Last month, Tesla CEO Elon Musk said he would check with service to see if a retrofit for a pedestrian speaker was possible, for older cars.

Are you having fun with Tesla Boombox?

Tesla Sets Up Joint Venture with Annex on Semiconductor Chips

U.S. automaker Tesla is preparing to take hold of its own semiconductor chip supply in China, with a new partnership surfacing to help increase electronics supplies. Tesla is partnering with Swedish chip manufacturer Annex Semiconductor to create a joint venture (JV) in China, according to a report from the South China Morning Post. The JV […]
Peter McGuthrie
27 mins ago

A revamped Model 3 is under development at Tesla, according to four people familiar with the plans in a report from Reuters on Monday. The updated model, dubbed “Highland,” is expected to decrease overall complexity and reduce the number of components in the Model 3’s interior. Additionally, the new Model 3 will focus on factors […]
Peter McGuthrie
31 mins ago

A 30-foot long, 12,000 lb metal sculpture featuring Elon Musk’s face atop the body of a goat riding a rocket has been spotted on the streets of Austin, Texas (via Fox Business). The statue was commissioned by a group of cryptocurrency enthusiasts who created a project called the “Elon Goat Token.” They wanted the sculpture […]
Nehal Malik
18 hours ago