Rivian announced its Q4 2021 earnings on Thursday, revealing it had delivered 909 electric vehicles to customers in the quarter. The automaker saw $54 million in revenue, while posting a $383 million loss for the quarter in terms of gross profit. Shares of Rivian are down 12% in after-hours trading to $36 per share. Rivan’s […]
Sarah Lee-Jones
9 months ago

On Thursday, Rivian CEO RJ Scaringe released a press release in which the company apologises for the recent increase in their vehicles, and vows to honour preorder prices. “Earlier this week, we announced pricing increases that broke the trust we have worked to build with you,” the letter opens addressing the negative reaction online from […]
Sarah Lee-Jones
9 months ago

Rivian today announced a slew of configuration updates for its R1T electric pickup truck and R1S electric SUV, accompanied by price hikes of up to 25% for both. Much to the chagrin of reservation holders, the price increases also apply to existing pre-orders and add-ons. Introducing our new Dual-Motor AWD configuration and our 260+ mile […]
Nehal Malik
9 months ago

Rivian Aims for 10% EV Market Share by 2030 as Production Ramps Up: CEO

Rivian Automotive CEO R.J. Scaringe said on Thursday that the electric vehicle (EV) startup is “making progress” with the ramp-up of production at its Normal, Illinois, assembly plant — reports Reuters. “We’re absolutely making progress,” he said of the company’s push to boost vehicle production while speaking at the Wolfe Research Global Auto, Auto Tech, and […]
Nehal Malik
9 months ago 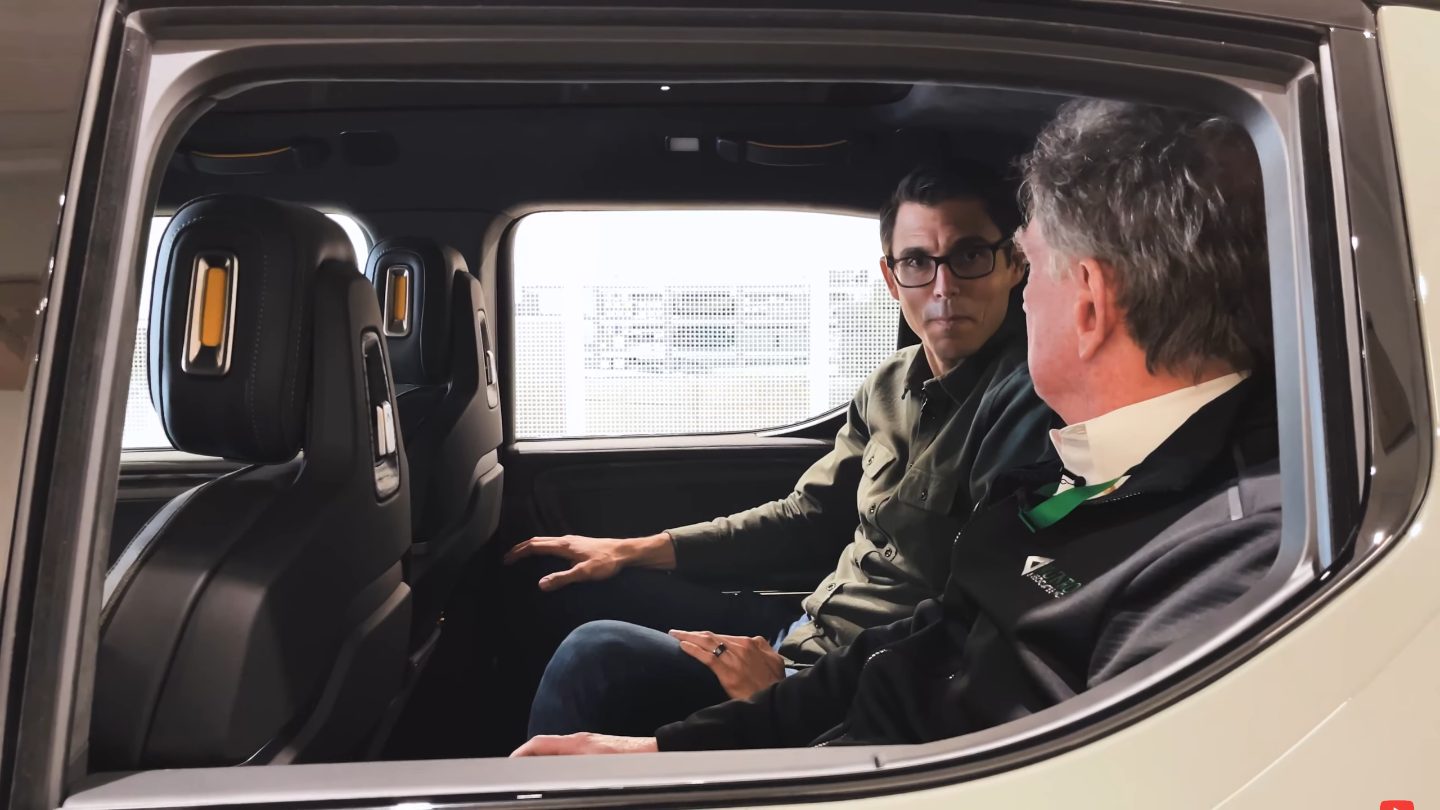 In a recently published YouTube video, “Teardown Titan” Sandy Munro visits electric vehicle (EV) startup Rivian’s production facility in Normal, Illinois, to meet with company CEO RJ Scaringe and talk about the R1T and R1S, as well as what the future holds for the up-and-comer. Scaringe told Munro about how Rivian started and the ideology […]
Nehal Malik
10 months ago 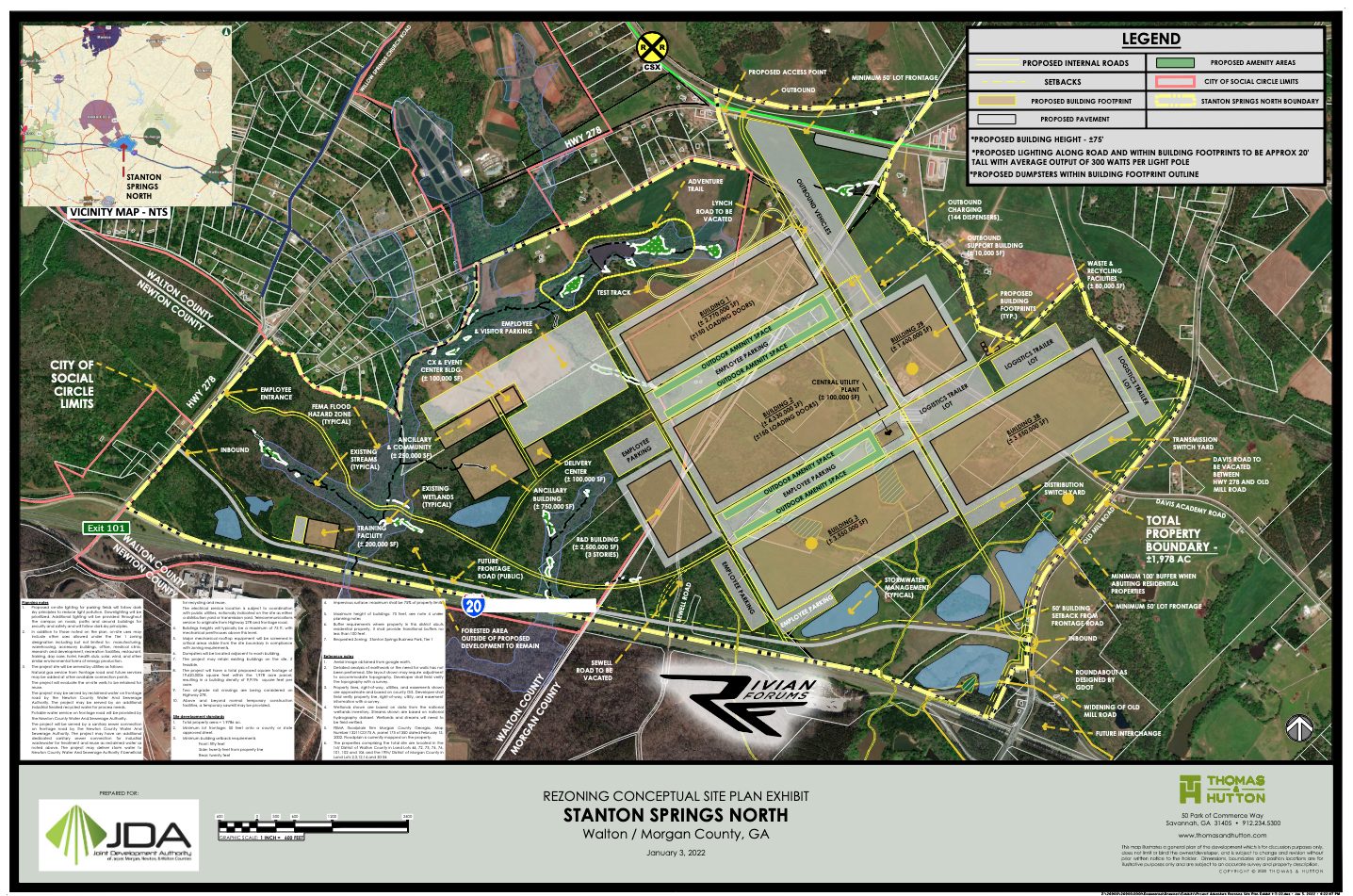 Following a report last month detailing Rivian’s plans to construct a second, larger production facility east of Atlanta, Georgia, a new image has surfaced showing what the factory layout is expected to look like. Rivian’s upcoming factory in Georgia is set to be five times larger than the company’s Normal manufacturing facility at around 20 […]
Peter McGuthrie
11 months ago

Rivian COO Rod Copes officially stepped down on Monday, after being in the position since March 2020, and just as the company begins ramping up production of the R1S, according to the Wall Street Journal. A Rivian spokesperson confirmed to the WSJ Copes retired from the automaker back in December, and was planned ahead of […]
Peter McGuthrie
11 months ago

Electric vehicle (EV) startup Rivian sent out the first deliveries of its Launch Edition R1T pickup truck in October, and its Launch Edition R1S SUV is on its way out the door. Rivian is now shifting its focus to producing Adventure and Explore Package vehicles. The company gave reservation holders an update on estimated delivery […]
Nehal Malik
11 months ago

Electric automaker Rivian released results of its first quarter as a public company, posting a net loss, while also confirming a second EV plant was coming in Georgia. Rivian posted an operational loss of $776 million and a net loss of $1.23 billion, within its previous guidance range. The company saw a loss of $12.21 […]
Sarah Lee-Jones
12 months ago

Motortrend has picked the Rivian R1T as its Truck of the Year: Long gone are the days when pickups were simply tools. Today they are, and for the better part of this century have been, family cars, luxury vehicles, off-roaders, lifestyle vehicles, and performance cars of all stripes. Each of these new use cases challenged […]
Sarah Lee-Jones
12 months ago

Rivian and the state of Georgia plan to announce the company’s second electric vehicle (EV) factory in the U.S., which will be located in Atlanta — reports The Atlanta Journal-Constitution. Citing sources close to the matter, the publication says Georgia Governor Brian Kemp and Rivian officials will be holding a ceremony next Thursday to announce the […]
Nehal Malik
12 months ago 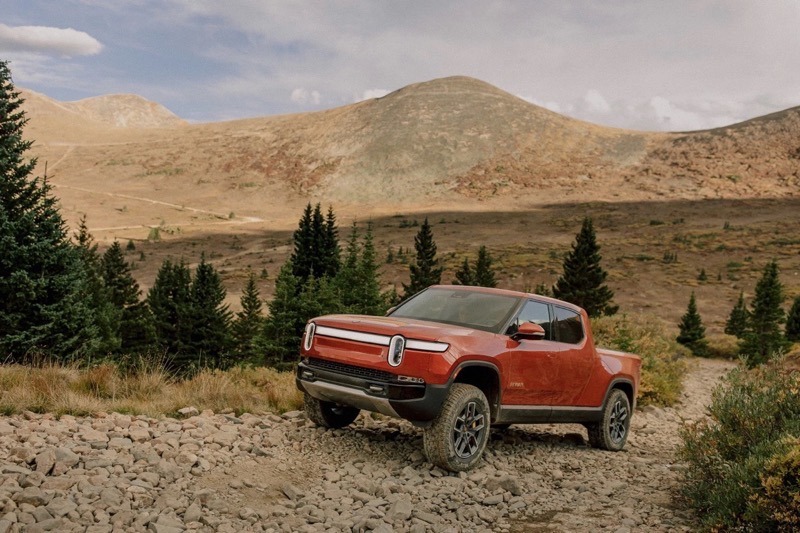 According to Yahoo Finance, a recent report from investment firm Morgan Stanley Research names Rivian as “the one” to beat Tesla. Rivian, an electric vehicle (EV) startup backed by eCommerce giant Amazon and veteran automaker Ford, went public on November 10 and raised a whopping $11.9 billion USD in funding at an initial offering price […]
Nehal Malik
12 months ago 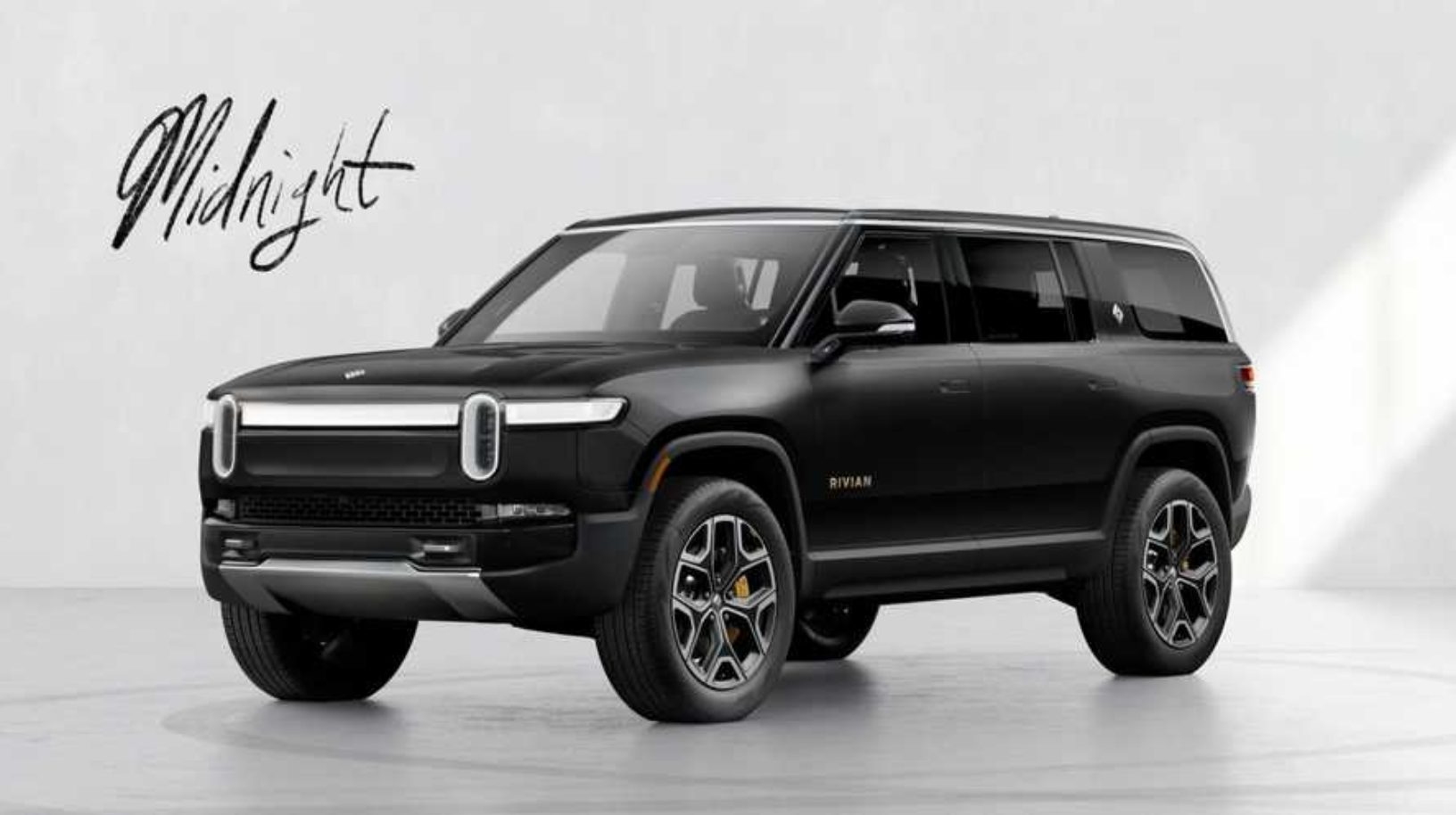 Just as Rivian starts delivering the first models of the R1T to employees, the company has announced delivery delays for reservation holders of the slightly-more expensive R1S, pushing delivery timelines back significantly. Rivian has pushed back deliveries of the R1S Launch Edition electric SUV at least until May or June of 2022, according to emails […]
Peter McGuthrie
1 year ago 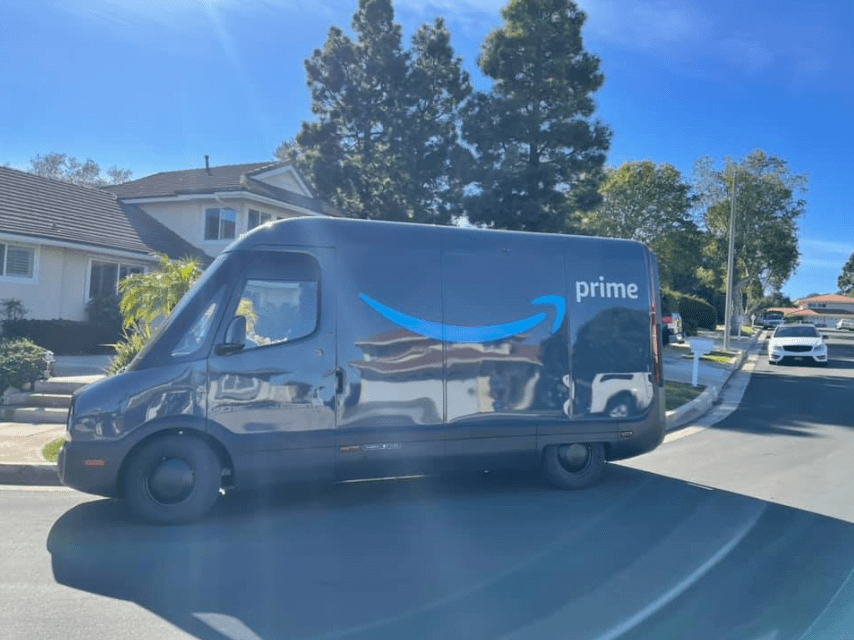 Rivian’s first electric vans being tested by Amazon may have less range than expected, depending on the HVAC system’s heating and cooling operations. Details were reported from a driver to The Information, citing how the Rivian van’s battery drained 40% faster than normal, when heating or cooling was turned on. Rivan disclosed in recent filings […]
Sarah Lee-Jones
1 year ago 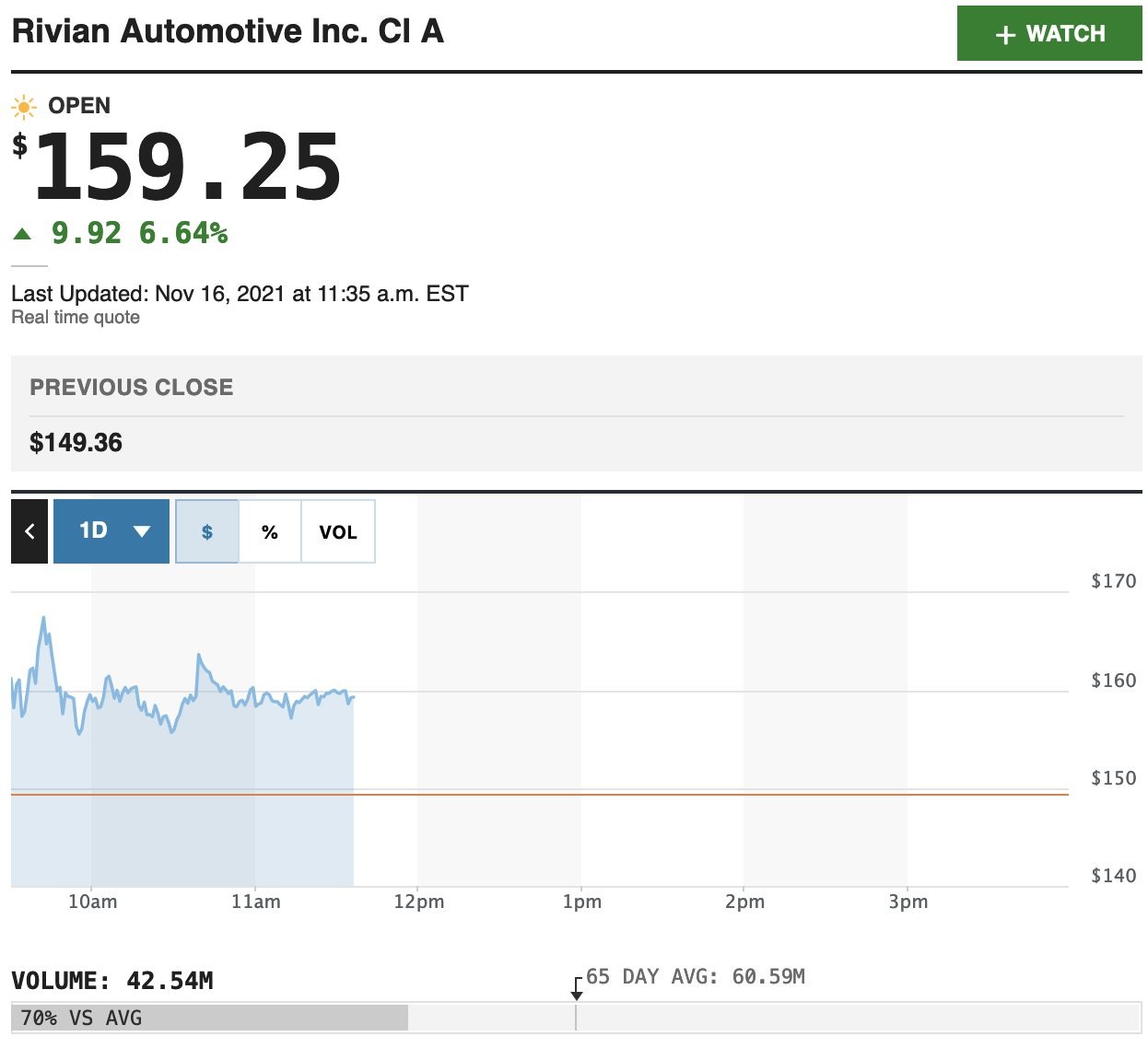 Rivian Surpasses Volkswagen in Market Cap, Despite $0 in Revenue

After Rivian’s proposed starting initial public offering (IPO) price of $62, the company landed a starting price of $76, before the company’s stock jumped in the past several days. Rivian has been on a five-day rally, pushing the company’s market capitalization past that of Volkswagen’s, according to Bloomberg. On Tuesday, Rivian’s surged 14 percent, trading […]
Peter McGuthrie
1 year ago