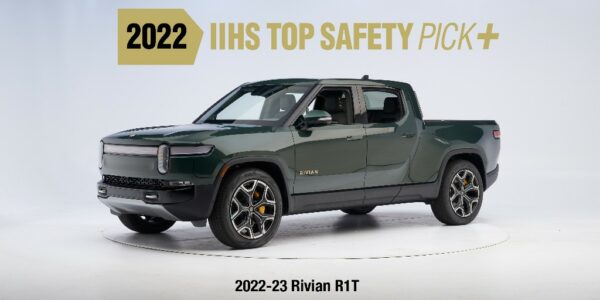 The Insurance Institute for Highway Safety (IIHS) has named the 2022-2023 Rivian R1T as one of its Top Safety Pick Plus award winners, according to a press release shared on Friday.

The R1T was tested in vehicle-to-vehicle evaluations and daytime vehicle-to-pedestrian tests, in all of which the electric pickup’s headlights and crash safety features were noted as reasoning for the high safety ratings.

The organization notes that, in order to win either the Top Safety Pick or its high-level Top Safety Pick Plus awards, vehicles must earn good ratings in six IIHS crashworthiness tests.

The Tesla Model 3 earned the Top Safety Pick Plus from the IIHS for four years in a row from 2018-2021, while the Model Y also earned the award from the organization last year.

Last year, Rivian’s R1T was also named Motortrend’s Truck of the Year, though this year the publication selected the Ford F-150 Lightning for the title.

The R1T’s press release also included a video depicting many of its safety testing procedures, which can be seen below.