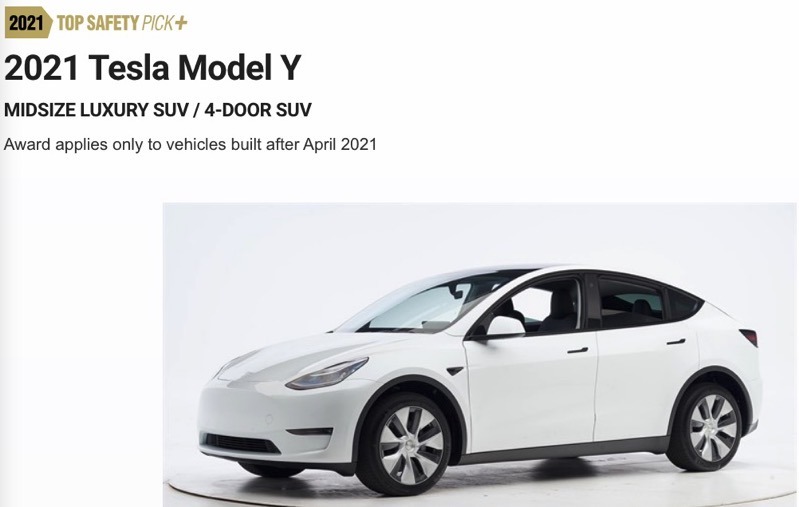 Also required is a front crash prevention system that can garner advanced or superior ratings in both the vehicle-to-vehicle and vehicle-to-pedestrian evaluations, says the IIHS.

“Model Y vehicles built after April 2021 meet all the criteria for the “plus.” Following a conversion to a camera only system, the standard front crash prevention system earns superior ratings in both the vehicle-to-vehicle and vehicle-to-pedestrian tests. The two available headlight systems earn good and acceptable ratings,” explained the IIHS in a press release on Tuesday.

In crashworthiness tests, the Model Y scored top ‘good’ marks in six tests. For crash avoidance and mitigation, headlights were given top ‘good’ marks and ‘acceptable’, depending on trim, while front crash prevention (vehicle-to-vehicle and vehicle-to-pedestrian) earned ‘superior’ ratings.

Child seat anchors in the 2021-22 Model Y were given ‘acceptable’ ratings, as lower anchors were determined to be “too deep in seat”.

Top Safety Pick+ from IIHS! That’s the highest overall rating, but we think we can get max score for all subcategories/individual tests too.

Back in October, Tesla shared details from its Crash Lab and how the company leverages ‘data driven safety’. Tesla is able to use safety data from its fleet of customer vehicles, then push out software updates to make its cars safer based on real-world crash scenarios.

Tesla makes the safest cars in the world & our factory injury rate is better than industry avg & tracking to be better than any auto plant in North America. We care deeply about safety at a fundamental level.

The Tesla Model Y launched in Australia last August, and it has been so popular with recent price cuts that its deliveries are being pushed further and further out. Tesla’s Model Y units are now showing estimated delivery dates of February to May on the company’s order configurator, as detailed in a report from The […]
Peter McGuthrie
20 hours ago