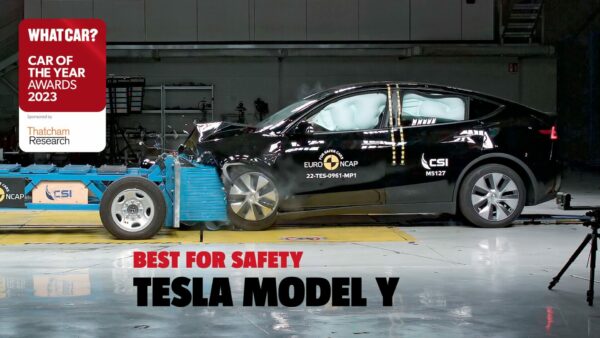 Tesla’s flagship sedan and SUV have earned three separate awards on Britain’s “What Car?” index, as shared on Friday in videos and on the rating index’s website.

The Tesla Model Y earned the “Best for Safety” award in the ranking system, while the Tesla Model 3 earned titles for both “Best for Efficiency” and “Best Executive Car.”

The safety tests were conducted in partnership with Thatcham Research, and the research firm also pointed out Model Y’s recent high scores on the Euro NCAP safety assessment.

The Tesla Model 3 and Y were also both awarded Top Safety Pick Plus awards by the U.S. Insurance Institute for Highway Safety (IIHS) last year.

The Model 3 earned the Best for Efficiency award with an efficiency of 8.5 pence per mile, which What Car calls “astonishingly low.”

Tesla also seems to be preparing to debut a refreshed design version of the Model 3 this year, dubbed “Highland,” and including a simplified design on the inside of the vehicle.

Last year, the Hyundai IONIQ 5 was granted the “Car of the Year” award in the UK, after being compared to the Model Y in a shootout from Edmunds just months earlier.

You can see Thatcham Research’s video discussing the What Car safety winner, the Tesla Model Y, below:

Recent weeks have brought on conversations about Tesla’s price cuts in markets around the world, and now the automaker is pushing a new message on its website for Model 3 leasing. Tesla’s Model 3 is now leasing at prices as low as $399 per month, according to a change on the automaker’s website yesterday, notes […]
Peter McGuthrie
18 mins ago