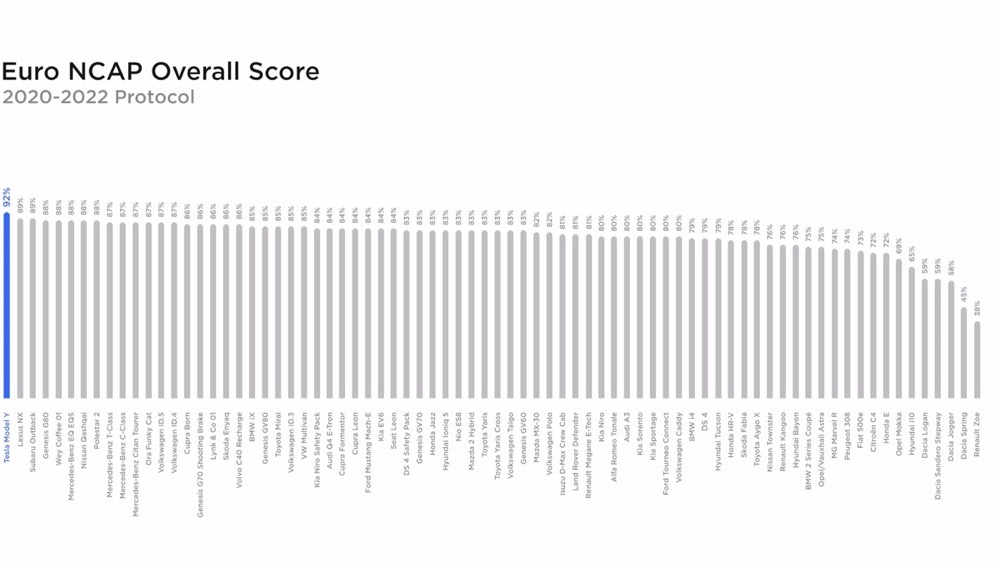 The electric automaker says “this was based on an evaluation of Model Y’s ability to protect adults, children and vulnerable road users like cyclists and pedestrians, as well as its safety assistance features.”

The Model Y scored 97% in the Adult Occupant Protection category—again the highest of any vehicle tested in this protocol, says Tesla. The Model Y beat the Lexus NX in second and Subaru Outback in third.

“This category score is determined by a series of frontal, side and rear whiplash tests in addition to an analysis of several other safety attributes such as rescue, extrication and post-crash safety,” said Tesla in a blog post.

Tesla Vision Autopilot also received a leading score of 98% in the Euro NCAP’s Safety Assist category. “This score was a result that many did not believe was possible without using radar,” touted Tesla. Tesla Vision is now standard for all of its vehicles in North America and Europe.

“Our team is dedicated to improving driving safety. Achieving some of the highest safety scores ever awarded doesn’t give us pause—it motivates us to make some of the world’s safest vehicles even safer,” concluded Tesla.

The company also noted the Model Y earned a 5-star rating from the Australasian New Car Assessment Program (ANCAP) today as well (which bases its results on the Euro NCAP tests).