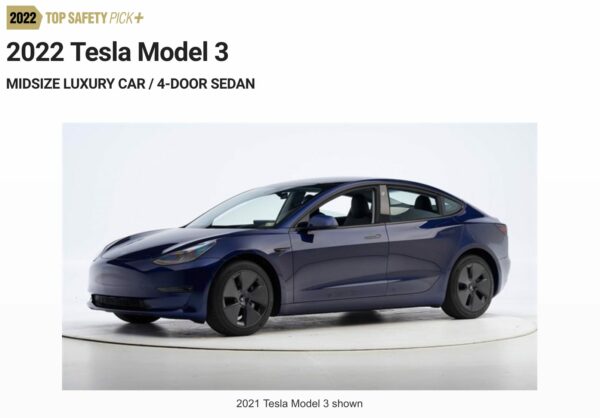 The Insurance Institute for Highway Safety (IIHS) has noted 65 vehicle models that include the 2022 Top Safety Pick+ award, including both the Tesla Model 3 and Y.

The Tesla Model 3 and Y units landed amongst the non-profit’s 65 2022 Top Safety Pick+ selections, according to the IIHS.

IIHS President David Harkey said, “We’re excited to see more vehicles on this list in 2022.” Harkey continued, “Our awards make it easy for car buyers to find models that will protect them in a crash and increase the odds they’ll never be in one. By shooting for Top Safety Pick+, automakers are showing that they’re committed to the same goal.”

Top Safety Pick+ selections also require acceptable headlights across all trims, with 31 models total being rated with what the organization considers good headlights.

Long-term vehicle subscription service Autonomy has launched an end-of-year sale that lets users subscribe to a Tesla Model 3 for what it is calling the “lowest price anywhere” for the electric sedan. Customers need to put down a $3,000 deposit and then pay $450 per month for the first 12 months, said Autonomy earlier this […]
Peter McGuthrie
22 hours ago