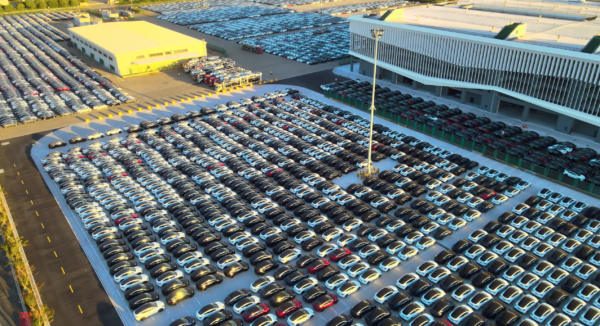 After reports showed that Tesla’s Q3 exports from China are expected to be massive, the automaker has officially broken a new record for the most vehicles loading on a ship to be exported.

A record 10,000 Tesla vehicles were spotted in a video from Wu Wa taken at China’s Luchao Port Shanghai Nangang Terminal over the weekend, set for loading onto ships and export, according to @SawyerMerritt’s count.

The figure beats out a previous record of 8,800 Tesla units at the port, and @Merritt noted that the 10,000 only represents a few days of Model 3 and Y production at Tesla’s Giga Shanghai factory.

In July, around 7,000 vehicles were seen at the Luchao port, displaying a gradual increase as Tesla heads into the year’s third quarter.

CEO Elon Musk’s Weibo account also reiterated Tesla’s plans for export and local deliveries, explaining the automaker’s pattern of delivering cars for export in the first half of the quarter, before hitting the local market in China.

Tesla’s suppliers in Sichuan were affected by a heatwave last week, which could cause some parts shortages in the coming weeks.

Here’s a list of all the new Tesla Superchargers that opened up across the globe between January 19 and 25, 2023, courtesy of data from Supercharge.info and the TMC Forums: Date Opened Location Number of Stalls Power Rating Official Listing January 19, 2023 The Village at Sandhill at 494 Town Center Pl, Columbia, SC, USA 12 250 […]
Nehal Malik
1 hour ago

Tesla announced its fourth-quarter and full-year 2022 earnings on Wednesday afternoon, reporting record revenue for the final quarter. The automaker reported revenue of $24.3 billion USD for October to November 2022, up a whopping 37% year-over-year. Wall Street, meanwhile, had forecasted $24.03 billion in revenue. Tesla reported a net income of $2.3 billion (GAAP) for […]
Nehal Malik
4 hours ago

A new bill proposal could cease the eligibility of most electric vehicles (EVs) for the $7,500 federal tax credit, if they do not meet specific battery component rules, according to a report from Automotive News Canada on Wednesday. The bill is expected to be introduced by U.S. Senator Joe Manchin (D-West Virginia) on Wednesday, with […]
Peter McGuthrie
6 hours ago