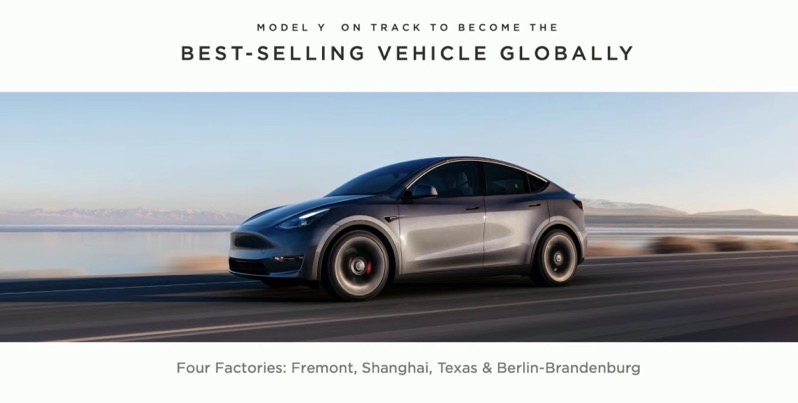 Musk stressed there’s “still a lot of work to do,” noting “these factories don’t magically work,” adding its Gigafactories in Berlin and Austin still need to spool up production.

The Tesla CEO also mentioned how the company will likely be able to announce the location of a new Gigafactory location this year. When people shouted “Canada”, Musk said “we got a lot of Canadas. I’m half-Canadian,” laughing.

Tesla says it plans to build 10 to 12 Gigafactories with an average output of 1-2 million units per factory. Currently, Tesla’s Fremont factory has the highest output in North America, but also stated how the Giga Shanghai team is “hard to beat” and was “just awesome.”

At Tesla’s 2021 annual shareholder meeting held last October, Musk said at the time the Model Y “should become the best-selling vehicle of any kind,” a milestone expected to be achieved in 2023, thanks to its four factories: Fremont, Shanghai, Texas and Berlin-Brandenburg.

Tesla Model Y units in the company’s new “Quicksilver” color have started making their way to showrooms across Europe, just a few weeks after the first units with the new paint option were spotted outside Gigafactory Berlin-Brandenburg. Electric vehicle (EV) enthusiast Lasse Edvardsen (@nasalahe) on Saturday shared images of a Quicksilver Model Y Performance on […]
Nehal Malik
3 hours ago

A Tesla Model 3 with a camouflage cover on the front and rear was recently spotted at a parking space in Santa Cruz, California (via @omg_tesla). What’s going on here? @klwtts @WholeMarsBlog @teslaownersSV pic.twitter.com/uFpxcsVh4D — omg_Tesla/Rivian (@omg_tesla) December 3, 2022 The electric vehicle (EV) seemed to have factory plates, indicating that it is part of […]
Nehal Malik
5 hours ago