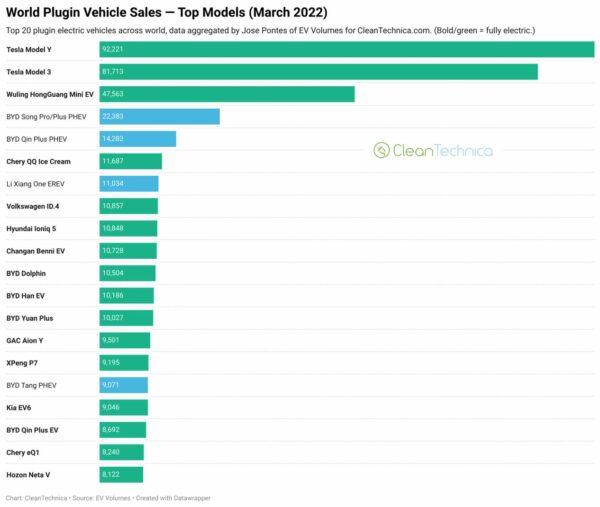 Electric vehicles (EVs) are entering a chapter of disruption to the auto industry at large in the next few years, and as they do, Tesla’s vehicles are still leading the charge.

The Tesla Model Y and 3 topped global plugin vehicle registrations in March, with battery-electric vehicles (BEVs) taking an impressive 11 percent of the world’s market share, according to data compiled by Clean Technica.

Overall plugins, including both hybrids and BEVs, took up 15 percent of the global auto market share.

This marks the Model Y’s third top-selling spot in a row, and an all-time sales record for the electric SUV crossover. It’s also the first time the Model Y outsold the Model 3 during a whole quarter.

The news also comes just a few months after Tesla’s opening of Gigafactory Berlin and Gigafactory Texas. Yesterday, it was reported Tesla had confirmed Giga Shanghai 2 was coming.

With the two new Gigafactories opening and starting with Model Y deliveries, the electric SUV may not be done breaking records yet, and Tesla’s production and sales overall can be expected to increase.