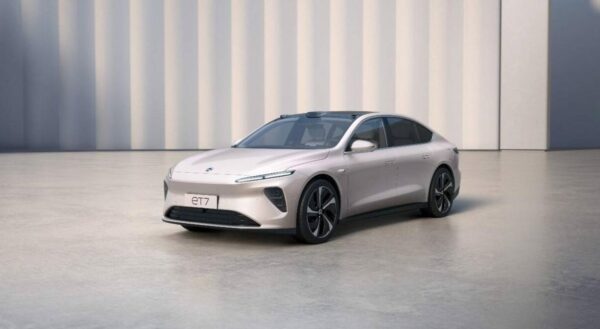 As the electric vehicle (EV) market in China is beginning to heat up, one startup automaker is beginning substantial production of the company’s first electric sedan, with deliveries coming soon.

NIO’s first ET7 units rolled off the production line on Thursday at its manufacturing facility in Hefei, China, according to CnEVPost.

The automaker’s factory is shared in a partnership with Jianghuai Automobile Group (JAC), and NIO will oversee a gradual increase in its output of the vehicle during this initial phase of production.

NIO says the ET7 will need to meet the requirements of the Production Part Approval Process, with the gradual increase to production output being used to test the quality of the vehicle’s components and build.

NIO ET7 deliveries are expected to begin on March 28, with delivery wait times set to vary by region and the overall impact of the ongoing COVID-19 pandemic.

NIO unveiled the ET7 sedan at its NIO Day event held in January, and a first look at NIO’s electric sedan was shared earlier this month.

The automaker is also expected to unveil the NIO ES7 electric SUV in April, with deliveries expected to begin later this year.

You can see a teaser of the building process for the ET7 below, showing various parts of the factory experience through the end, when the vehicles are completely built.

NIO on Sunday announced fourth-quarter deliveries of 40,052 electric vehicles (EVs), marking a 60% increase year-over-year and a new quarterly record for the Chinese automaker. The company also marginally beat its own delivery outlook for Q4, which it lowered from 43,000-48,000 vehicles to a more modest 38,500-39,500 last week. At the same time, the EV […]
Nehal Malik
1 month ago