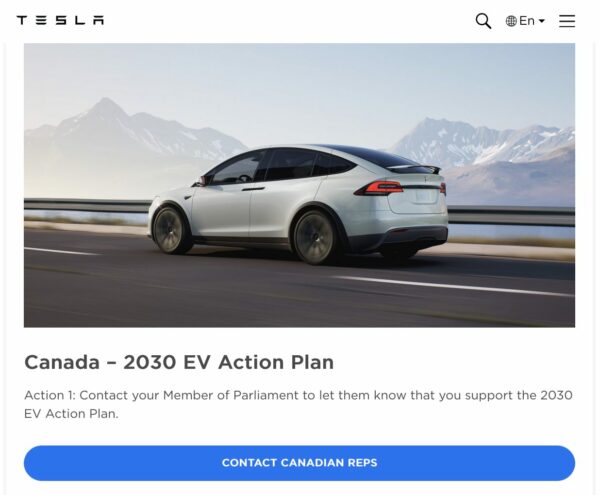 Electric vehicles (EVs) are slowly but surely becoming the most coveted cars on the market, and one group in Canada is working to make mass adoption happen through a new plan it hopes the government will adopt.

Tesla is encouraging its fans in Canada to speak to their members of Parliament about supporting the country’s 2030 EV Action Plan, as detailed on the latest Tesla Engage page from the automaker’s website on Wednesday.

The page encourages users to read up on the 2030 EV Action Plan at the program’s site, and it says users should sign up for the plan’s mailing list.

This is not the first time Tesla has reached out to Canadians. They first emailed owners back in November to sign up for notifications about supporting the 2030 EV Action Plan.

On the page, Tesla says, “We need your help in getting this plan adopted by government. Make your voice heard today, and let your Member of Parliament know what this would mean to you.”

If adopted by Canada’s government, the plan would make 100 percent of passenger vehicles sales and medium and heavy-duty truck sales electric by 2030, in addition to equipping apartments and condos with charging stalls.

In addition, it would double-down on a used EV sales program to help increase EV adoption amongst low and modest-income households.

Late last month, Tesla unveiled its Full Self-Driving (FSD) program to about 60 drivers in Canda,  before launching the FSD feature in software update 2022.4.5.4.